After a trial that ran for less than two weeks, Cuban  was relieved but still angry that the charges had been raised in the first place. 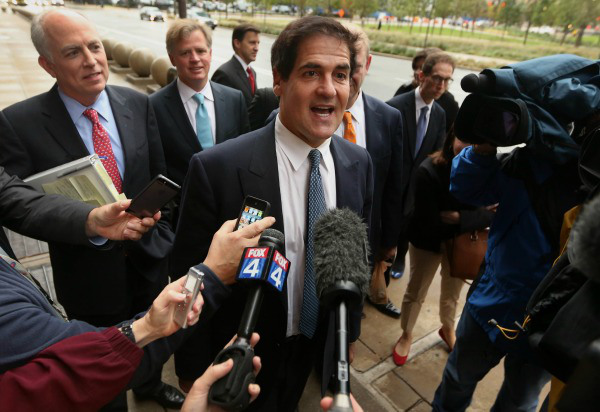 Mark Cuban, entrepreneur, businessman, TV star  and owner of the Dallas Mavericks was not flashing his famous grin on Wednesday in Dallas, despite being found not guilty of all charges raised by the Security Exchange Council [SEC] of insider trading, after he sold stock in an Internet company in 2004.

The civil lawsuit against Cuban was raised by the SEC in late 2008, and despite the suit being dismissed in court the following year, the SEC applied to the court of appeals revived re-instituted the charges the following year.

The basis of the charge raised by the SEC was that Mark Cuban quickly disposed of the 600, 000 shares he held in Mamma.com, an internet search company based in Canada. According to the charges Cuban had received confidential information that the shares were about to be diluted as a result of private placement in the Montréal-based company. Before the private placement went ahead Cuban sold his shares in Mamma.com for around eight million dollars, avoiding, according to the SEC, a potential loss of around 10% of their share value.

However the trial jury after deliberation that lasted for slightly less than four hours, found Mark Cuban innocent of the charge.  In response, the trial judge, pointed out that the SEC has failed to prove a number of key elements in its prosecution specifically that Cuban traded in his shares after receiving non-public information provided by Mamma.com Chief Executive Guy Faure.

Although Mark Cuban understandably was  relieved and happy after the verdict was announced in court, as he made his way outside, he was particularly critical of the SEC in general, and the prosecution lawyer Jan Folena, who Cuban accused of trying to intimidate him.

The SEC lawyers left the courtroom immediately after the not guilty verdict was announced and made no comments to the press. Later the SEC issued a statement in which they promised that the negative result in Dallas would not deter them from taking people to trial, where they believe the defendants have violated the federal securities laws

If he had been found guilty, Mark Cuban could have been fined the sum of up to $2.5 million, although many legal commentators point to the fact that the charismatic Cuban’s legal fees may have not been that much less

In addition to his extensive business interests, and ownership of the Dallas Mavericks, Cuban has recently returned to the small screen as one of the resident experts on “Shark Tank”, a reality show featuring some of America’s top financial figures analyzing and deciding whether to invest in new products presented by budding entrepreneurs.

Mark Cuban was born and raised in the suburb of Mount Lebanon, Pittsburgh, Pennsylvania, first studying at the University of Pittsburgh, later transferring to Indiana University, graduating from the Kelley School of Business with a bachelor’s degree in business administration in 1981. During his college years, Cuban continued to display his strong entrepreneurial spirit involving himself various business ventures, including a pub, disco lessons, as well as a highly lucrative chain letter scheme.

After leaving university, Cuban moved to Dallas, Texas where he found a job as a salesperson for one of the first PC software retailers to open in the city.

Driven on by his success in computer sales, Cuban started his own company, MicroSolutions, a system integrator and software reseller. The company rapidly made its new name for itself due to a combination of Cuban’s larger-than-life personality as well as their expertise in the early software technologies.    Cuban sold MicroSolutions for the then considerable sum of $6 million, leaving him with around $2 million to invest in his next venture

Cuban’s next venture was a sports reporting internet site Broadcast.com which he sold to Yahoo! in 1998 for $5.9 billion all that sum being in Yahoo Stock.

With the Yahoo stock becoming a regular dripping roast Cuban began to diversify his own business activities, acquiring the NBA franchise for the Dallas Mavericks, as well as establishing the Landmark Theatres chain, the Magnolia Pictures production company, and becoming chairman of AXS TV, an HDTV cable network.