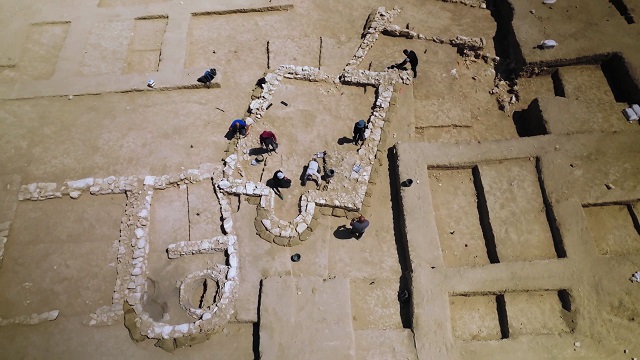 Israeli archeologists have made an amazing discovery: A luxurious estate and a rare rural mosque said to be more than 1,200 years old were recently discovered in the city of Rahat in the Negev by the Israel Antiquities Authority (IAI).

What is now one of the earliest known mosques in the world as yet to be discovered is located in the area of a Bedouin town in the south of Israel.

Astounding archeological discoveries are being made more and more often now in Israel. After more than a century of such work, it is a wonder that so much is still out there just waiting to be discovered. For example, in May well-preserved agriculture tools including tens of loom weights used for weaving clothing, big pottery storage pots, and iron equipment, as well as numerous picks and scythes were uncovered in a 2100-year-old Hellenistic Hasmonean era farmhouse located near Nahal Arbel in eastern Galilee.

And in March, an ancient amulet was uncovered on Mount Ebal bearing Hebrew letters with the Biblical name of God. The amulet was said to be more than 3,000 years old.

The latest discovery came after work conducted by IAI to facilitate the construction of a new neighborhood in Rahat, underwritten by the Authority for Development and Settlement of the Bedouin in the Negev. It provides graphic details of the gradual transition from Christianity to Islam that took place in the seventh to ninth centuries CE.

The excavations, directed by Oren Shmueli, Dr. Elena Kogan-Zehavi and Dr. Noe David Michael on behalf of the Israel Antiquities Authority, revealed buildings with Christian and Early Islamic characteristics in close proximity to one another.
Archaeologists were surprised to discover yet another rural mosque of the seventh – eighth centuries CE. The mosque includes a square room and a wall facing the direction of Mecca (qibla), the holy city of Islam. A niche shaped in a half-circle, is located along the center of the wall pointing southwards (mihrab).

These unique architectural features show that the building was used as a mosque. The mosque stands alone in the site and it could have been used by several dozen Muslim worshippers, most likely local inhabitants, for prayers.

The mosque is located about 400 meters south of a luxurious estate building constructed around a central courtyard. It includes halls with stone pavement, some paved with marble, and walls decorated with frescos painted in red and yellow. Remains of fine tableware and glass vessels, some decorated with drawings of plants and animals, which were revealed in the building, evince the wealth of its inhabitants.

According to the director of the Israel Antiquities Authority, Eli Eskozido, “The important largescale excavation in Rahat contributes to our knowledge, and that of the residents of the city of Rahat, who, together with the Authority for Development and Settlement of the Bedouin in the Negev, will be rewarded with the integration of unique finds in the development of the city – the ancient next to the modern – as in the words of King Solomon: “One generation comes and another passes away, and the earth abides forever.”