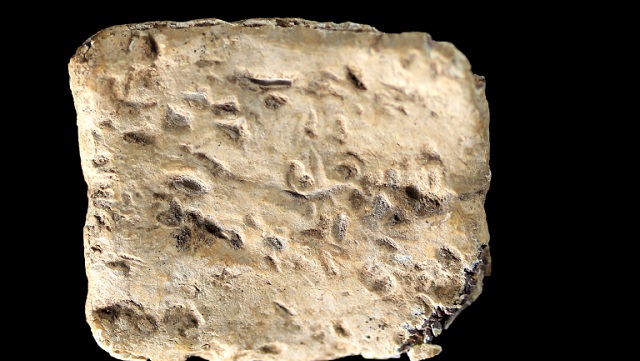 Close-up of the outside of the arguably Late Bronze Age lead curse tablet discovered on Mt. Ebal in 2019. (Michael C. Luddeni Associates for Biblical Research)

Archeologists in Israel have made yet another remarkable discovery – they have found yet another proof for something recorded in the Bible. And, for the first time, the name of God is seen set apart – YHWH – In such an ancient period.

In what has been described as a convincing proof of the existence of the blessing and cursing ceremony that the Bible records as having been conducted on two mountain tops in ancient Israel, an ancient amulet was uncovered on Mount Ebal on which the name of God is inscribed.

Archaeologists Scott Strippling, Prof. Gershon Galil of Haifa University, Peter Gert van der Vijn and Jones Gettenberg of the Czech Academy of Sciences and experts in deciphering ancient texts succeeded in deciphering the ancient Hebrew script on the amulet that was discovered on the altar of Yahweh in December 2019. In January of this year it was announced that the letter “Alef” in ancient Hebrew had been identified on it.

The name “YAWAH” was found inscribed on the amulet which was discovered at the altar of Yahweh in Samaria, north of Jerusalem. This inscription is centuries older than other similar discoveries. And the inclusion of this specific biblical name of God has tremendous religious significance as it shows that the people of this region did believe in God at that time, that this name did not come much later.

Head of the Samaria Council Yossi Dagan, however, also sees this as an important political discover. “The fingerprints of history here in Samaria – clear proof of our right to the land,” he said. “The importance of this finding to the people of Israel for its generations and to the State of Israel cannot be overstated. “We as a council will continue to work to preserve the place and demand that the authorities address the issue and take care to protect the place. ”

The researchers revealed, by advanced means, with the help of researchers at the University of Prague, that the words were found on the amulet were:

Scholars speculate that the amulet dates from the Late Bronze Age and is suitable for the discovery of the late Prof. Adam Zertel, who discovered the altar of Joshua during the Mount Menashe survey in the 1980s, which dated the site to the last quarter of the 13th century BC. Zertel concluded that the site was a remnant of an altar, and identified it with the altar described in Deuteronomy, chapter 27, verses 1-10, and in the book of Joshua, chapter eight as a central part of the blessing and cursing class, and therefore called it ‘Joshua Altar’.

This is the oldest Hebrew script ever found. Scholars believe that the mascot is from the Late Bronze Age. Appropriate for the time when Joshua Ben-Nun came with the people of Israel to enter the land and in fact there was a blessing and cursing ceremony.

The size of the amulet is 2 cm by 2 cm. And the explicit name of God appears on it, probably in its earliest appearance ever.