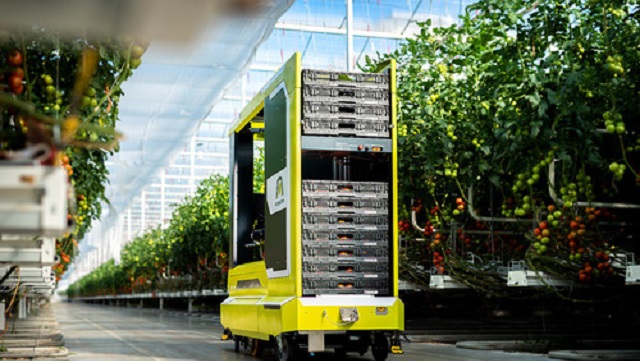 Israeli aggrotech startup MetoMotion developes advanced, intelligent robotic systems to help growers operate farms of the future. The company has completed an investment round of $5 million led by Ridder, a leading greenhouse technology company, and Navus Ventures, the family investment office of Lely.

MetoMotion boasts that its GRoW robot brings “state-of-the-art technology into the greenhouse, making use of latest Artificial Intelligence (AI)-based computing for 3D perception. Specially designed, flexible motion control and path-planning algorithms give the robot precise motion between plants and a unique design that fits the modern greenhouse environment.” Dual arms enable harvesting on both sides of the greenhouse row.
–

Israel has always been at the forefront of aggrotech since the early days of the first Zionist settlements. The country may now be known more as Startup Nation for all of its success in the high tech world. But until recently it was best known for its agricultural innovations. The pioneers of early Israel famously drained swamps, planted orange groves (oranges are not indigenous to the Middle East) and irrigated deserts to grow all sorts of crops.

A month ago, Israeli aggrotech startup Fieldin raised $30 million in a Series B funding round, led by Fortissimo Capital, with the participation of Zeev Ventures, Icon Ventures, Luxembourg-based Maor Investments, and Akkadian ventures. Fieldin has raised a total of $50 million to date. Founded in 2013 by Boaz Bachar and Iftach Briger, Fieldin offers a smart farm control center that it says gives specialty crop growers unrivaled visibility across all field operations.

The MetoMotion platform automatically collects information during harvesting providing valuable insights, such as yield forecasts and yield distribution analyses, for improved crop management. The GRoW robot packs the crops into standard industry boxes for easy and seamless integration with existing production procedures. The robot’s capabilities include adapting its robotic technology to other labor-intensive greenhouse tasks such as pruning, pollination, de-leafing and data collection for cultivation analysis.

MetoMotion CEO Adi Nir said, “This investment by Ridder and Navus is an exciting development for MetoMotion. Beyond the funding, our investors bring a combination of rich knowledge, experience and understanding of the greenhouse and ag robotics industry that provides us with an unparalleled partnership in launching a system that is a great match for market needs and truly helps growers solve pressing issues in greenhouse farming.”