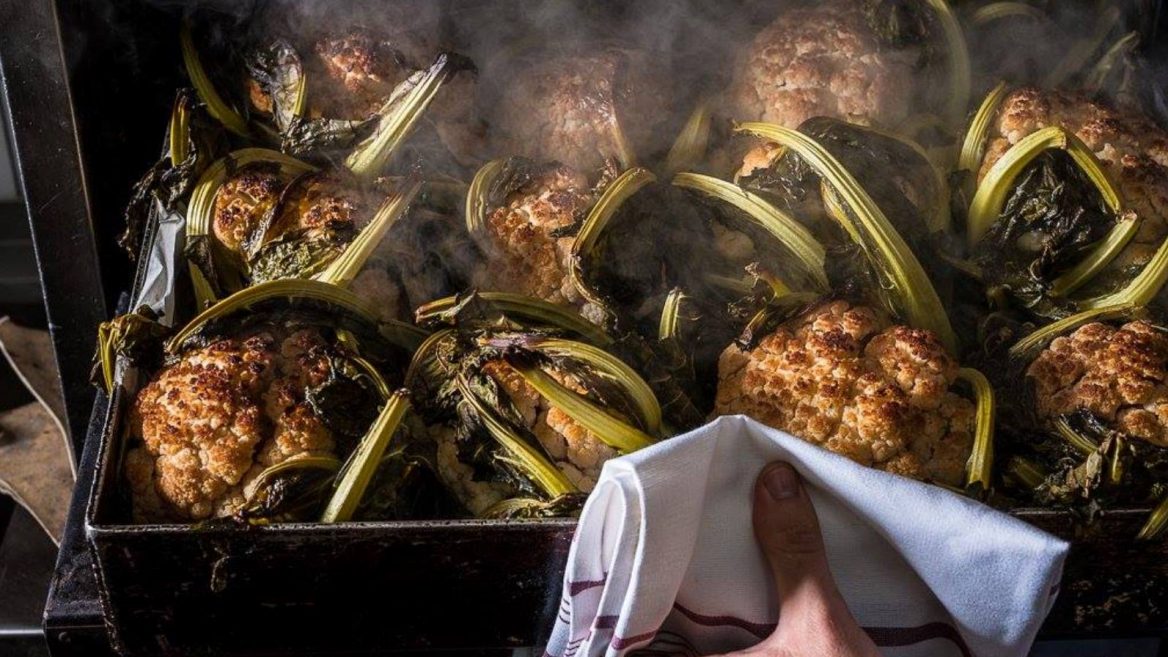 With his wild gray curls going every which way, and eyebrows spewing over his thick black-rimmed glasses, Eyal Shani looks more like a classic novelist, or mad composer, than a chef.

When he opens his mouth to speak, poetry recited in a deep whisper rolls off his tongue at a snail’s pace, yet it seems that all of these elements — careful consideration, analytical thought and a little bit of head-in the-clouds syndrome — is what has made this man the superstar Israeli chef-entrepreneur that he has become. 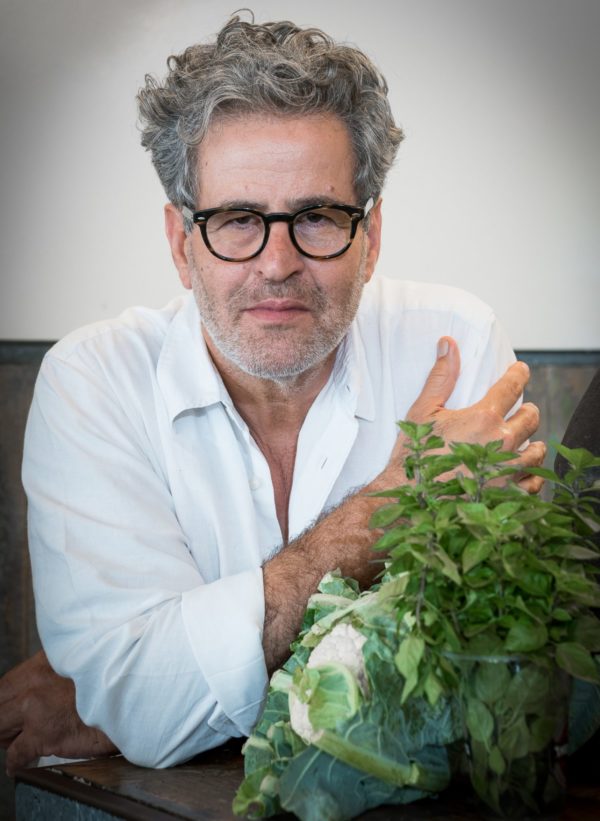 His fame catapulted across the Internet when his famous whole roasted cauliflower went viral in 2016 with the help of Israeli-American chef Alon Shaya, who features a version of it at Shaya in New Orleans.

A simple spin on something so basic, and naturally Mediterranean, its unexpected mode of preparation – seemingly more suitable for roasting a chicken — got people’s attention. Even more interest came from the cauliflower being served up in a pita (as was every other dish) at Shani’s Tel Aviv restaurant, Miznon.

Despite being kind of a no-brainer for a city known for its vegan-friendly restaurants, whole roasted cauliflower was a new concept ushered in when the restaurant opened its doors in 2011.

Shani’s restaurants also serve meat dishes in abundance. Miznon’s pita-based concoctions are fast food of the most satisfying order—slow cooked and packaged to function as a quick lunch on the go, when in reality they took quite some time and attention to prepare.

It is one way that the chef and his business partner, Shachar Segel, who now own handful of other chef restaurants in Tel Aviv, including Hasalon, Port Said, Romano and Malka (their first all-kosher debut), are able to reach a millennial-aged audience with decidedly smaller bank accounts than the typical fine-dining crowd.

“I try to give my food to the young people because they carry with them the best vibes for leading my food into the country, into the city and into the street,” Shani tells ISRAEL21c.

Successful dishes weren’t always a reality for the celebrity chef. Long before he became known as a judge on the “MasterChef Israel” television series, he introduced Turkish coffee chicken, an original recipe from when he was first learning to cook while recovering from a disabling injury on a battleship.

As Shani himself puts it, “It was terrible, just terrible. People used to throw it off the sides of the boat.” Yet somehow even that stuck, remaining a staple dish on naval ships in Israel to this day.

His first restaurant, Ocean, opened in 1989 and was the first of two culinary ventures that flopped in the early ’90s.

It wasn’t until 2011 that Shani hit restaurant gold with his first Miznon (“buffet” in Hebrew) on Ibn Gvirol Street in Tel Aviv. This was after he’d already been gracing Israeli television screens for six years.

Branches of what started as a totally Tel Aviv kind of place can now be found in Melbourne, Vienna, Paris and New York, the newest having opened up shop in Manhattan’s Chelsea Market last January. 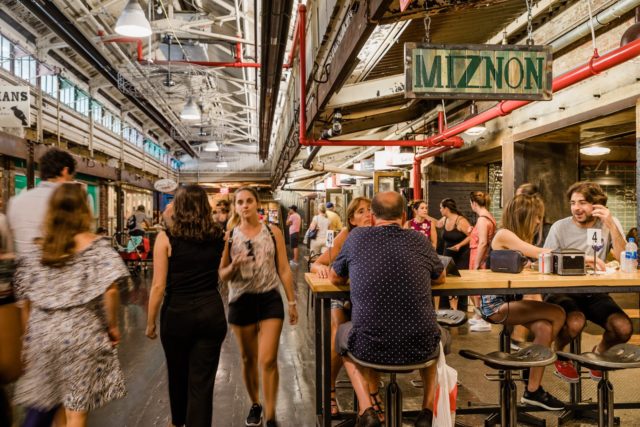 With an unapologetic Israeli spirit, all 12 Miznon locations intentionally dabble in putting their own spin on well-known local dishes from the cities where they reside, while dedicating the rest of the menu to signature Israeli dishes.

The local dishes come more from a place of tribute than brazen chutzpah, but Shani’s carefree attitude regarding this couldn’t be more Israeli.

“I love to come to a place to find the essence of the food and to work on it. One of the most iconic foods of New York is the Reuben sandwich, so I took it, analyzed it and reconfigured it. We now do a version of a Reuben sandwich with avocado that is so good. People love it. It’s almost the same, but yet it’s so different,” he says.

Other foods on his New York menu include a take on an American hamburger made from beef tartare. Representing the Israeli dishes: chraimeh (spicy fish stew in tomato sauce) using 12 kinds of hot Mexican red peppers.

One thing Americans will no doubt appreciate is Shani’s affinity for farm-to-table eating, something he was involved with since before it was a global trend. He famously demanded the tomatoes for his Ocean restaurant be sourced from the best organic farm in Jerusalem.

Farm-to-table is a concept close to many Israeli hearts, with our wonderful fruits and vegetable markets and a heavily self-sufficient agricultural system.

Eyal Shani neatens up this idea by calling it “bagage to table,” using the Hebrew word for “trunk” in place of “farm,” meaning that produce should be local but doesn’t have to be grown onsite as American chef Dan Barber famously does at Blue Hill in Westchester County, New York. 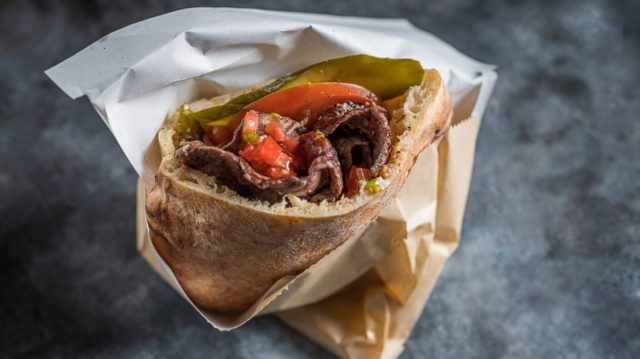 And no wonder, since no single farm could supply the 500 cauliflower heads per day that Shani serves his customers in New York alone. Shani gets most of his produce for the New York City branches trucked in from farms farther upstate.

The main principle of food

Mired by ups and downs including a nudity scandal that he claims was an accident in the form of a distasteful Instagram pic, Eyal Shani may be eccentric but the man clearly knows how to cook, and more than just cauliflower.

Sharing his Israeli-inspired food with the world so successfully puts him on par with other chefs doing the same thing: Yotam Ottolenghi, Michael Solomonov and Einat Admony, to name just a few.

His nonstop career has left him with this takeaway message:

“If you ask me what I know about food I can tell you that it’s all about the energy and the will of the one who’s making the food. There is no inferior food or superior food. All the ingredients are only ingredients because they are made by creation, and it’s all about understanding the depths of the meaning of the ingredient, and to serve it while knowing where to stop and where to continue. That is the main principle of food,” Shani states poetically.