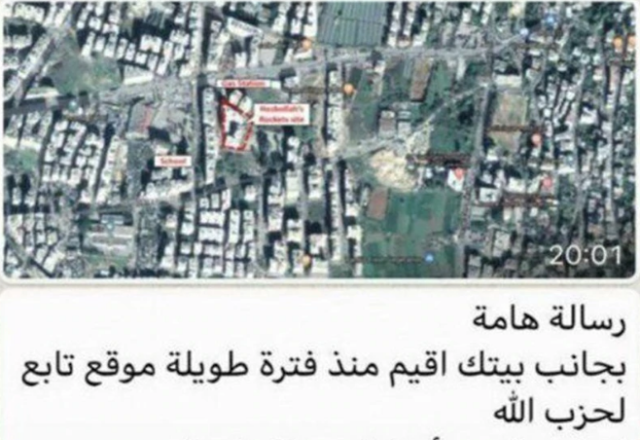 Thousands of residents of the Dahieh suburb south of Beirut, an area controlled by Hezbollah, received anonymous mobile phone notifications warning them they live in close proximity to a Hezbollah weapons storage compound that has the potential of exploding at any moment, the Asharq al-Awsat newspaper reported on Wednesday, implying Israel is responsible for incident.

“Important message, near your home, a Hezbollah site has been established, proceed with caution,” read the mysterious Watsapp message.

According to the Arab newspaper, Israeli political sources refused to comment on the claim that Israeli intelligence is behind the messages.

Immediately after the prime minister’s speech at the UN General Assembly, the IDF released video evidence of what it said were Hezbollah rocket building sites in Beirut.

Netanyahu said in his speech that Hezbollah was acquiring the technical know-how from Tehran to convert non-precision missiles into precision missiles to hit Israeli cities with an accuracy level of 10 meters.

The IDF said there are other similar, Hezbollah-operated, rocket building sites in Beirut, and elsewhere in Lebanon.

According to the military’s intelligence, one of the sites is located inside a Hezbollah soccer stadium while another is adjacent to the Beirut–Rafic Hariri International Airport.

One of the attempts to transfer machines designed to convert precision rockets from Syria to Lebanon was thwarted by the IDF in an attack on September 17 in Latakia, which resulted in the downing of the Russian spy plane by the Syrian army sparking an international crisis due to Russian military’s claims that the IDF bears responsibility for the incident.

On Monday, Lebanese Foreign Minister Gebran Bassil, spoke to foreign ambassadors before taking them on a tour of the area mentioned in the prime minister’s UN speech, where Bassil reiterated that there were “many statements … affirming the possession of accurate missiles by Hezbollah. However, this does not mean that these missiles are present in the vicinity of Beirut airport.” he stressed in an apparent attempt to dismiss Netanyahu’s claims.

Bassil, a political ally of Hezbollah, said Israel aimed to “falsify facts concerning Lebanon and to vocalise lies that carry the seeds of a threat that does not frighten us, and that Netanyahu had used the platform of the UN General Assembly “to justify another aggression on a sovereign country like Lebanon,” he vented.

In this article:Middle East, Finance, Israel-Lebanon