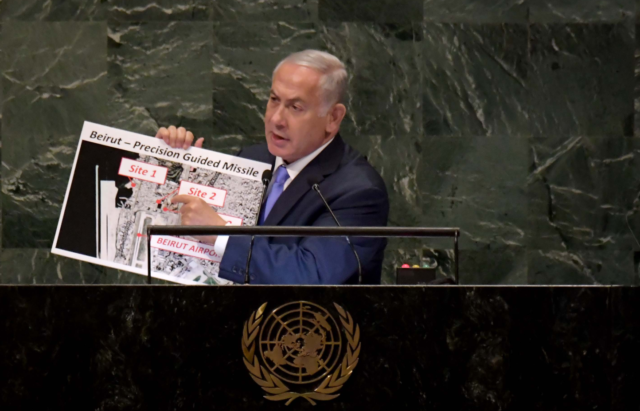 Prime Minister Benjamin Netanyahu revealed before the UN General Assembly on Thursday “another Iran’s secret atomic facility” in Teheran, some four months after he presented what he said was “conclusive proof” of a secret project underway in Iran for the development of nuclear weapons.

“What I’m about to say has not been shown publicly before … Today I’m revealing the site of a second facility, Iran’s secret atomic warehouse,” he said after a brief introduction praising his country under his leadership for opposing the 2015 Iran nuclear deal.

US President Donald Trump withdrew from the deal in May, making way for the reimposition of crippling sanctions that have devastated Iran’s currency and which threaten to ravage its economy.

The new site Netanyahu identified sits a short distance from Shourabad where the Mossad pinched a trove of documents and evidence showing that Iran had archived its nuclear materials despite the nuclear deal.

“When I spoke here 3 years ago Israel stood alone among the nations. Of the nearly 200 countries that sit in this hall, only Israel openly opposed the nuclear deal with Iran. We oppose it because it threatens our future, even our very survival,” the prime minister said.

Continuing what has become a traditional characteristic of presenting visuals during his UN speeches, Netanyahu said “Let me show you exactly what the secret atomic warehouse looks like. Here it is,” while holding up a picture of satellite and up-close images.

According to Netanyahu, the second secret site was right near a rug-cleaning store, which he quipped may now be radioactive.

There was no immediate official response from Tehran. Iran’s mission to the UN did not respond to a request for comment. Iran’s state-run, English-language Press TV channel carried Netanyahu’s remarks live, but cut away after he made the allegation about the nuclear warehouse. 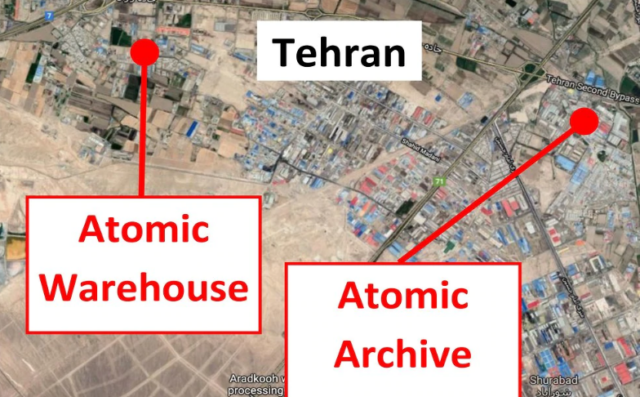 “Since we raided the atomic archive, they’ve been busy cleaning out the atomic warehouse. Just last month they cleared out 15kg of radioactive material … They took it out and they spread it around Tehran in order to hide the evidence,” he claimed.

He also said Israel shared the information with the UN atomic watchdog, the Vienna-based International Atomic Energy Agency (IAEA). The agency did not immediately respond to requests for comment.

“The IAEA has not demanded to inspect a single site discovered in that secret archive. So given this inaction, I decided to reveal today something else that we have shared with the IAEA and a few intelligence agencies,” he explained.

Listing a legion of threats posed by Iran and its Lebanon-based terror proxy group Hezbollah, which he said was acquiring the technical know-how from Tehran to convert non-precision missiles into precision missiles to hit Israeli cities, Netanyahu said that he had a message for “the tyrants of Tehran.”

In a similar vein, Netanyahu issued a warning to Hezbollah.

“I have a message for Hezbollah today: Israel also knows what you’re doing. Israel knows where you are doing it and Israel will not let you get away with it.”

The prime minister’s speech comes on the heels of a diplomatic spat with Russia after Syria accidentally shot down a Russian spy plane while attempting to repel an IAF strike in Latakia.

Since the incident last week, Israel has said that it will not be inhibited by the adverse political fallout from continuing to attack targets to prevent Iranian military entrenchment in Syria or the transfer of advanced weapons to Hezbollah—a message that Netanyahu used the podium to reiterate.

Accusing Iran of using money that poured into its coffers following the lifting of economic sanctions in the wake of the nuclear deal, Netanyahu said that Tehran “used the money to fuel its vast war machine.”

But Iran’s aggression, the prime minister said, was not confined to the Middle East, asserting that it had spread both into New York and Europe.

Despite the threats posed by Iran to the European continent, Netanyahu said that its nations were still “appeasing” and “coddling” the Islamic republic by seeking to mitigate the financial impact of US sanctions.

“Well, in Israel, we don’t need a wakeup call because Iran threatens us every day. Because despite the best of hope, and there were many hopes around the nuclear deal, this deal did not push war further away. It brought war ever closer to our borders,” Netanyahu said.

But Netanyahu did say that the Iran nuclear deal had made one significant, positive contribution to the MIddle East.

“I have an important confession to make. This may surprise you. But I have to admit that the Iran deal has had one positive consequence … By empowering Iran, it brought Israel and many Arab states closer together than ever before, in an intimacy and friendship that I’ve not seen in my lifetime and that would have been unimaginable years ago,” he said while pounding the rostrum.

Netanyahu also used the end of his speech to criticize the people who have objected to Israel’s recent passage of the Nation-State Law, which Abbas said would lead to an official apartheid system.

“Israel is called racist for making Hebrew the official language? … When Israel is declared an apartheid state for declaring itself the nation-state of the Jewish people, it is downright preposterous,” he shouted.

“There are more than 50 countries here that have crosses or crescents on their flags,” he pointed out, stressing that those countries are inhabited by people from many faiths. “Only Israel is denigrated,” he said, for celebrating its national heritage.

“President Abbas, you should know better. You write a dissertation denying the Holocaust. Your PA imposes death sentences on Palestinians for selling land to Jews,” he said.

He also highlighted the PA’s policy of paying Palestinian terrorists for killing Jews in Israel.

“President Abbas, you proudly pay Palestinian terrorists who murder Jews. In fact the more they slay, the more you pay. That’s in their law too, and you condemn Israel’s morality? You call Israel racist? This is not the way to peace,” he vented.

Netanyahu’s remarks to the UN came a day after Trump made his first public endorsement of a two-state solution to resolve the decades-long conflict between Israel and the Palestinians.

Speaking before the prime minister, President Abbas told the UN General Assembly that Jerusalem “is not for sale” while urging President Trump to rescind his decisions recognizing Jerusalem as the capital of Israel and cutting aid to the Palestinians, which he said had undermined the two-state solution to the Middle East conflict.

“I renew my call to President Trump to rescind his decisions and decrees regarding Jerusalem, refugees and settlements.”

By Ynet News and news agencies