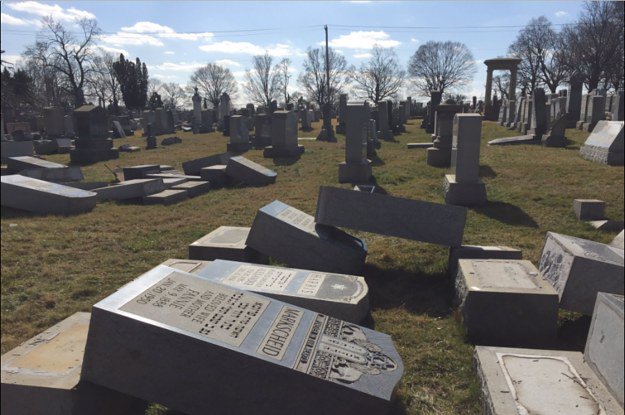 Philadelphia cemetery vandals have broken and overturned more than 100 gravestones at Mount Carmel, a week after a similar case occurred in St. Louis, Missouri.

The anti-Semitic event is the latest in a spate of bomb threats and attacks against Jewish sites across the United States, since president Trump elect. Some of the headstones are more than 100 years old, were cut in half, local media reported Sunday.

A Jewish cemetery in Philadelphia was vandalized — the second incident of its kind this week https://t.co/8OIebkRteH pic.twitter.com/ZASm40dA23

Aaron Mallin discovered the vandalism Sunday when he came to visit his father’s grave at the cemetery. “I’m hoping it was maybe just some drunk kids,” he told WPVI-TV. “But the fact that there’s so many, it leads one to think it could have been targeted.”

The Anti-Defamation League (ADL) has offered a $10,000 reward for information leading to the arrest and conviction of those responsible. This award is provided through the generous support of the Mizel Family Foundation.  A local Fraternal Order of Police lodge also is offering a reward of $3,000.

The attack comes a week after more than 100 headstones were damaged at a Jewish cemetery in Missouri. The incident prompted a Muslim-led crowdfunding campaign to raise more than $100,000 to repair the cemetery, and a visit by Vice President Mike Pence.

“We are horrified by the desecration at Mount Carmel Cemetery,” said Nancy K. Baron-Baer, ADL Regional Director. “This act is cowardly and unconscionable, and is all the more despicable coming on the heels of a similar vandalism at another Jewish cemetery in St. Louis last week. We urge anyone with information on this crime to report it immediately to the Philadelphia Police Department at 215-686-TIPS.”

After remaining silent on the subject, President Donald Trump on Tuesday decried the anti-Semitic threats against Jewish community centers across America as “horrible” and “painful.”

On International Holocaust Remembrance Day on January the White House raised eyebrows regarding its statement that made no mention of the 6 million Jews killed in the Nazi genocide.