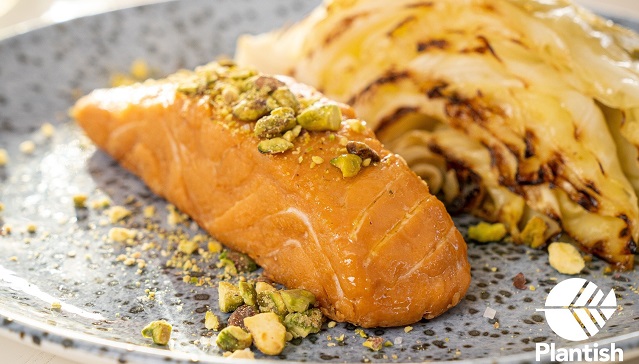 Plantish salmon™ is nutritionally similar to conventional salmon, and is high in protein, Omega-3s, Omega-6s, and B vitamins. Photo by Shahaf Beger

Israeli startup Plantish, which uses plant proteins to create fish, has raised $12.45 million in seed funding led by State Of Mind Ventures, the largest seed round to date in the burgeoning alternative seafood market.

Israel is ripe with startups making alternative food products to replace meat, fish and dairy. This is not only good for vegetarians, but it is also good for the environment because farmed meat, poultry and fish use up tremendous resources and leave behind waste that harms the environment. So Plantish is in good company.

The Israeli startup Redefine Meat believes it will shake up the restaurant industry. Although meat substitutes of various kinds are already a common product in supermarkets and even in restaurants, the brilliant innovation of Redefine Meat is in creating the slice of steak-like meat. Last year it launched its 3D printed steak. And Aleph Farms has invented a lab-cultivated steak using flesh cells it claims looks and feels like steak.

Founded in mid-2021, Plantish’s mission is to save the oceans through production of plant-based, whole-cut fish fillets that are similar in taste, texture, and nutrition to conventional fish.

Their first product is Plantish salmon, which the company boasts mimics cooked salmon in taste, texture, appearance, and structure, while also having the same nutritional values as its conventional counterpart, with high protein and Omega-3 content. Plantish’s current prototype can be prepared and cooked in all the methods that conventional salmon is prepared.

“We’ve already seen it happen in the meat market, now it’s the time for fish,” says Ofek Ron, Plantish CEO and Co-Founder, “and in particular salmon, which accounts for $50 billion in the half a trillion dollar seafood market. The problem has been that fish is so difficult to replicate until now.”

“We understand that over 60% of seafood is eaten outside the home, and salmon is among the most popular fish and animal protein in the world. Therefore we are focusing our efforts on the foodservice route and you can expect to see us in fine dining restaurants within the next two years.”