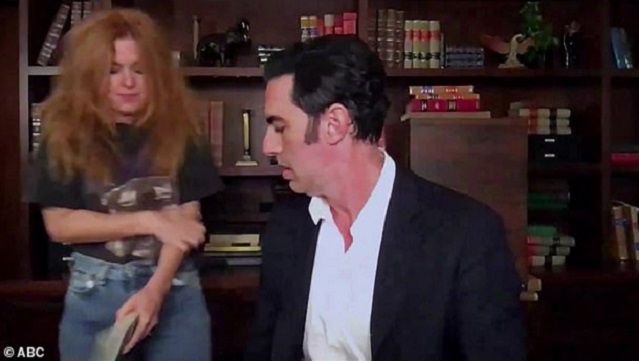 Jews and political or social causes go hand and hand just like Jews do with entertainment. So it is no surprise that Jewish entertainers always put themselves in the middle of the latest political controversies. So JBN has decided to make this list of five of the biggest Jewish celebrity political stories for 2021.

Here they are in no particular order.

First on the list is a story about Jews and Blacks in America healing the rift between the two communities. Once upon a time the two groups marched side by side to promote civil rights and other social causes in America. But much of that changed over the years. Now a group of celebrities are trying to change that.
In February Tiffany Haddish, Gene Simmons, Larry Wilmore, Herbie Hancock, Louis Gossett Jr and Jason Alexander were among the more than 170 Black and Jewish leaders from the entertainment industry who joined together to launch the Black-Jewish Entertainment Alliance, a joint initiative by Black and Jewish entertainment industry professionals devoted to countering racism and antisemitism in the entertainment community.

It would be an understatement to say that relations are strained between the Jewish and Black communities in America. The two groups’ leaders once marched together for civil rights. But then new issues arose in America which caused a rift between them. This was in spite of their shared histories being the victims of racism and oppression.

In September, Bette Middler showed the world that she was really angry about a new law passed by the state of Texas that put new limitations on women’s ability to get an abortion. She was so angry that she told Texan women not to sleep with men in protest.

Actually, she wants all American women to deny all American men coitus until something is done to ensure women’s rights in America.
–

The famed singer and actress tweeted, “I suggest that all women refuse to have sex with men until they are guaranteed the right to choose by Congress.”

Actor Sacha Baron Cohen is no fan of Donald Trump’s. And in 2021 he described the banning of Donald Trump from Twitter as, “the most important moment in the history of social media.” The Borat star has been highly critical of social media platforms like Twitter and Facebook for not doing enough to block hate speech and has been at the forefront of campaigns to get them to do so.

“We did it,” he tweeted. “This is the most important moment in the history of social media. The world’s largest platforms have banned the world’s biggest purveyor of lies, conspiracies and hate. To every Facebook and Twitter employee, user and advocate who fought for this–the entire world thanks you!”
–

In any other company, Mark Zuckerberg would have been fired years ago.

It’s the boy robot who runs them. pic.twitter.com/72XXSZ4LMx

Oh, and he really doesn’t like Mark Zuckerberg either.

Ivanka Trump and hubby Jared Kushner might be out of power, for good. And Ivanka is in trouble with the law too. Her business dealing related to Trump properties while daddy was in office are under scrutiny.

The political watchdog group Citizens for Responsibility and Ethics in Washington (CREW) obtained the final financial disclosure that the couple was required to make under Federal law as White House staffers.

Everyone was talking about the so called “cancel culture” in 2021. Basically, any time a celebrity said the wrong thing or used the wrong word connected in any way to racism or politics he was in danger of being cancelled – of seeing his career ended. But not everybody agrees that cancel culture is a real thing.

For example, just ask Mel Gibson how his career is going these days.

Jon Stewart really wants to be taken seriously. He was a comedian once. Then came “The Daily Show.” And now, after a six year absence from television, Jon Stewart has decided that he needs to be at the center of attention again, so he has a new program called “The Problem with Jon Stewart.”

On Sunday night Jon Stewart was interviewed for the closing of the New Yorker Festival. To prove that he is an expert on everything, and therefore justify his insistence on hosting yet another political show in which he tells the world how he knows best about everything, including matters about which he clearly knows nothing, like Israel, Stewart for some reason spoke about what is known in America today as “Cancel culture.”

He was probably thinking that he needs to remind people of his political slant. But one wonders why he did not simply attack Israel again.