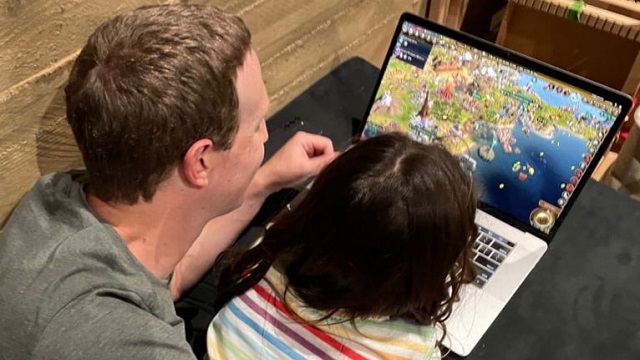 Mark Zuckerberg in a more sensible photo with his daughter from his Facebook page.

Facebook and its owner Mark Zuckerberg have been under the microscope over their business practices since the fake news scandals broke during the elections of 2016. Now Mark Zuckerberg is under fire for new allegations of cooperating with dictatorships. This comes as Facebook is trying to transform itself, rebrand, and expand into what it calls the metaverse.

Well for starters, the Washington Post revealed that in 2020 Mark Zuckerberg personally caved to pressure from the government of Vietnam to censure Facebook. According to the report, the Facebook CEO gave the Vietnamese government the ability to block any anti-government posts from its service. This was done because Facebook earns an estimated $1 billion a year in Vietnam and could not afford to lose so much business.

Wow, time really does change everything. Remember when Vietnam was the western hating Communist country that beat the Americans? Now it is one of Asia’s business hubs, a center of commerce that makes billions a year for all of those evil capitalists that it once fought a war to destroy.

Then there is Facebook’s problem with human trafficking. This week CNN reported that the service is still being used to promote what is called “domestic servitude.” Both Facebook and Instagram have been used to promote the trafficking in people who are basically used as slaves for household domestic work

The situation got to be so bad that in 2018 Apple threatened to drop Instagram from its app store. So Facebook made changes.

Facebook spokesman Andy Stone confirmed told CNN, “We prohibit human exploitation in no uncertain terms,” Stone said. “We’ve been combatting human trafficking on our platform for many years and our goal remains to prevent anyone who seeks to exploit others from having a home on our platform.”

All of these problems may be part of the reason why Facebook is expected to formally rebrand by the end of the month. Facebook is planning on expanding into what it calls the metaverse and will copy Google when that company created Alphabet as a new parent company.

The new name is expected to be revealed at Facebook’s annual Connect conference to be held on October 28th. It is said that the decision is due to the company’s desire to focus on creating a metaverse, and not just being known as a social media company. But could it also be because Facebook’s image has been damaged?