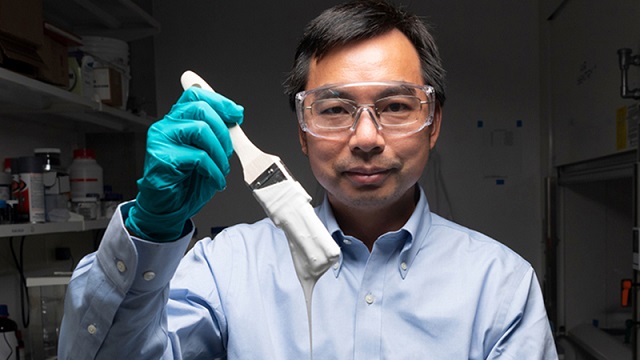 The world’ whitest paint can help the world fight the destructive effects of climate change. It does so by keeping the heat out of a building or house, thereby reducing the need for air conditioning and its high energy use in summertime. This is according to a new study from scientists at Purdue University, led by Xiulin Ruan, a Purdue University professor of mechanical engineering.

Climate change is very much real, is caused by the activities of people, and has clearly made the world hotter. The U.N released a report about this in August. The Intergovernmental Panel on Climate Change (IPCC) released its official report last month in which the world body declared that not only is climate change very much real, but it also caused by human activities.

Israel’ Minister of Environmental Protection Tamar Zandberg responded immediately to the report saying “Israel has begun necessary actions, but it is imperative to declare a climate emergency, define climate disasters as a strategic threat on the threat map and prepare accordingly.” Zandberg has pushed Israel’s new government to implement new laws to limit carbon emissions in the country.

Leave it to Israel, Startup Nation, to find the solution, or solutions, to climate change. Israeli startups are coming up with ways to provide drinking water out of the humidity in the atmosphere, harness solar power to reduce greenhouse emissions, and the development of green buildings which not only absorb heat and light for energy, but reduce the need for air conditioning with external gardens that shield the interior from heat, while eating up excess CO2 from the air.

So, what does the Whitest Paint do? Purdue University engineers say that they have created the whitest paint yet. Coating buildings with this paint may one day cool them off enough to reduce the need for air conditioning, the researchers say. The paint, developed at Purdue University, has just gotten Guinness World Records title. The record appears in the 2022 edition of Guinness World Records.

This white paint is the result of research building on attempts going back to the 1970s to develop radiative cooling paint as a feasible alternative to traditional air conditioners. Ruan’s lab had considered over 100 different materials, narrowed them down to 10 and tested about 50 different formulations for each material.

Two features make this paint ultra-white: a very high concentration of a chemical compound called barium sulfate – also used in photo paper and cosmetics – and different particle sizes of barium sulfate in the paint. What wavelength of sunlight each particle scatters depends on its size, so a wider range of particle sizes allows the paint to scatter more of the light spectrum from the sun.

There is a little bit of room to make the paint whiter, but not much without compromising the paint.

“When we started this project about seven years ago, we had saving energy and fighting climate change in mind,” said Xiulin Ruan, a professor of mechanical engineering at Purdue, in a podcast episode of “This Is Purdue.”

“If you were to use this paint to cover a roof area of about 1,000 square feet, we estimate that you could get a cooling power of 10 kilowatts. That’s more powerful than the central air conditioners used by most houses,” he said.