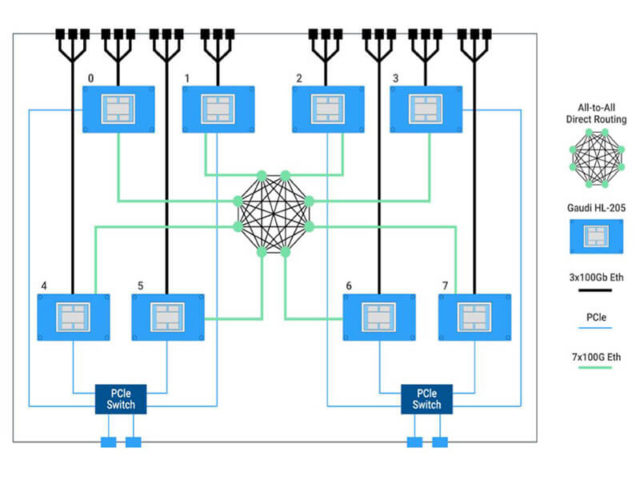 In addition to record-breaking performance, Gaudi brings another industry first to AI training: on-chip integration of RDMA over Converged Ethernet (RoCE v2) functionality within the AI processor, to enable the scaling of AI systems to any size, using standard Ethernet. With Gaudi, Habana Labs’ customers can now utilize standard Ethernet switching for both scaling-up and scaling-out AI training systems. Ethernet switches are multi-sourced, offering virtually unlimited scalability in speeds and port-count, and are already used in datacenters to scale compute and storage systems. In contrast to Habana’s standards-based approach, GPU-based systems rely on proprietary system interfaces, that inherently limit scalability and choice for system designers.

The Gaudi processor includes 32GB of HBM-2 memory and is currently offered in two forms:

Gaudi is the second purpose-built AI processor to be launched by Habana Labs in the past year, following the Habana Goya™ AI Inference Processor. Goya has been shipping since Q4, 2018, and has demonstrated industry-leading inference performance, with the industry’s highest throughput, highest power efficiency (images-per-second per Watt), and real-time latency.

“Facebook is seeking to provide open platforms for innovation around which our industry can converge,” said Vijay Rao, Director of Technology, Strategy at Facebook. “We are pleased that the Habana Goya AI inference processor has implemented and open-sourced the backend for the Glow machine learning compiler and that the Habana Gaudi AI training processor is supporting the OCP Accelerator Module (OAM) specification.”

The Gaudi Processor is fully programmable and customizable, incorporating a second- generation Tensor Processing Core (TPC™) cluster, along with development tools, libraries, and a compiler, that collectively deliver a comprehensive and flexible solution. Habana Labs’ SynapseAI™ software stack consists of a rich kernel library and open toolchain for customers to add proprietary kernels.

Habana Labs is an AI processor company founded in 2016 to develop from the ground-up processor platforms that are optimized for training deep neural networks and for inference deployment in production environments. We are unlocking the true potential of AI with solutions offering orders of magnitude improvements in processing performance, scalability, cost, and power consumption.  Habana is located in Tel-Aviv, Israel, San Jose, California, Beijing, China and Gdansk, Poland, employing 150 people worldwide.