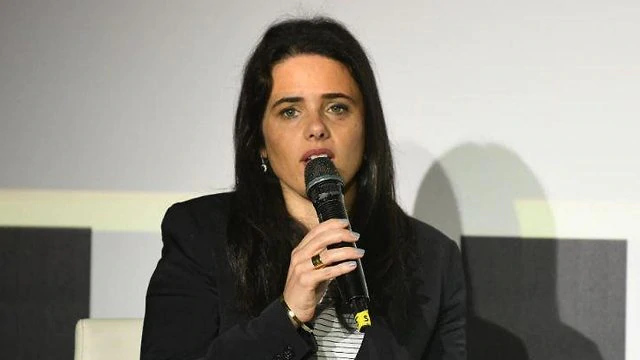 Justice Minister Ayelet Shaked believes Prime Minister Benjamin Netanyahu’s next term in office “will be his last,” but says she and her newly announced New Right party will still seek to join his next coalition government. Shaked was speaking for the first time since forming the party alongside Education Minister Naftali Bennett, following their split from Jewish Home.

The heads of the coalition parties announced last week that the country would hold early elections in April 2019, citing an inability to pass key legislation on drafting ultra-Orthodox men into the army. Critics charge, however, that the prime minister is going to the polls before his indictments in multiple corruption investigations drive away the voters.

“The prime minister isn’t young anymore and there are investigations hanging over his head,” Shaked told the audience at a conference held by Ynet’s sister publication Calcalist. “I keep saying that I very much hope all of his cases will be dropped soon and everything will get back to normal.”

She said that even if Netanyahu were indicted after the elections, he could still remain at the helm of the next coalition government.

The outgoing justice minister also repeated the assertion that the new party aims to unite the secular and the religious factions of the right-wing camp.

On Saturday, Shaked and Bennett announced they will establish their new party ahead of the general elections due to take place in April. However, the move is believed to be a political ploy to gain leverage during coalition negotiations, with Jewish Home and the New Right forming a joint bloc immediately after the elections.

“He (Bennett) is religious and I am secular, and ever since we first entered politics, our aim has been to unite the religious and the secular. It’s happening in every other sphere, so there’s no reason it wouldn’t happen in politics,” Shaked added.

The justice minister said she is realistic about the number of seats the New Right might win in the upcoming elections.

“We’re not aiming for 20 Knesset seats but we aspire for double digits,” Shaked said. “Benjamin Netanyahu will be the next prime minister and we certainly strive to become his government’s key partners.”

“It’s also no secret that I want to keep the justice portfolio… but the finance portfolio has also always interested me,” she said.

Shaked rejected claims that she and Bennett decided to form a new political party due the financial woes Jewish Home is currently experiencing.

“We inherited a party that had a debt of NIS 34 million (approx. $9 million) and we managed to reduce the debt significantly. I hope that whoever follows in our footsteps, will continue this trend,” she said.

In this article:Naftali Bennett, Finance, Elections in Israel