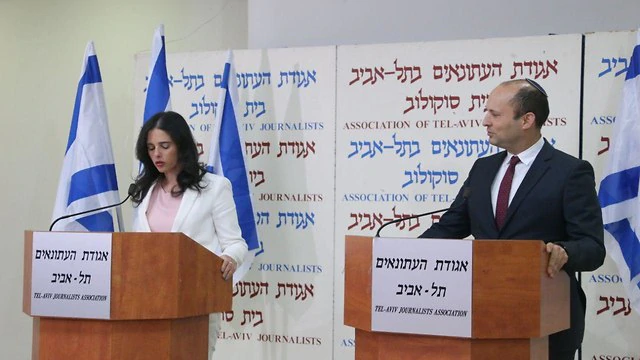 Jewish Home chairman Naftali Bennett and Justice Minister Ayelet Shaked announced Saturday evening that they are to list a new party called the New Right, and are splitting from the Bayit Yehudi party.

The new party is to approach both secular and religious rightists: “in the past we were able to prevent things like releasing terrorists or founding of a Palestinian state, but we’ve lost our ability to influence (the government). The prime minister understands that he has the religious Zionists in his pocket and that they’ll go with him wherever he leads. We offer a true partnership, like in an army tent, like in my home. My wife Gilat’s family is secular, but we’re one family. The new party is rightist, no ifs and no buts. If we were to exist 13 years ago there would have been no withdrawal from the Gaza strip. It’s a new right for religious and secular people.”

“We’re off to a new start and offer an alternative to national leadership. The new right is the real right,” Bennet said.

Shaked spoke of the importance of cooperation between secular and religious publics: “in 2012 we arrived at the Bayit YehudiJewish Home party. I’m secular and he (Bennett) is religious. A true partnership. I am grateful that religious Zionism opened its door to me, I felt at home and I have much love for this public. We’ve become an influential power together, a small party with a big impact, and we’ve had many achievements.”

Bennet and Shaked have until Sunday, January 30th, to announce a split from their home party if their new party is to enjoy party funding and air time for election broadcasting. The law specifies that in case of a party split, it has to be announced up to three days after the vote on dispersal of the Knesset- a time frame that ends tomorrow. A Knesset committee has to also approve the split by Sunday at midnight.

In this article:Naftali Bennett, Finance