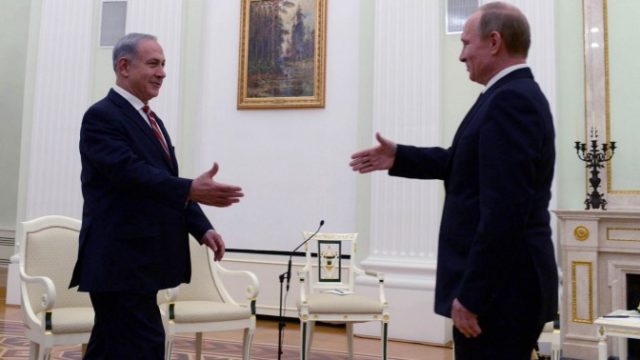 A special Russian delegation arrived in Israel on Wednesday, as part of Moscow’s efforts to ease tensions between the two countries following the downing of a Russian plane by Syrian forces in September, during an attempt to repel an Israeli airstrike.

The Russian delegation, headed by Foreign Affairs Committee Chairman Konstantin Koschev and Defense Committee Chairman Victor Bondar, was to discuss the Hezbollah terror tunnels that the IDF is working to uncover dug under the Israel-Lebanese border.

The delegation’s visit, which has been kept under wraps so far, is viewed by Israel as highly important as it symbolizes the Kremlin’s intention to leave behind the crisis over the plane.

The Russian delegation is expected to tour the Israel-Lebanon border on Thursday, and will view the four cross-border terror tunnels exposed by the IDF since it had launched Operation Northern Shield. In addition, the delegation will meet with members of the Knesset’s Foreign Affairs and Defense Committees for a classified discussion on the security situation on the northern border and a meeting with the National Security Council will also be held. The delegation heads will also meet with Soviet-born Knesset Speaker Yuli Edelstein.

Officials in Jerusalem said that over the few past days, Russia had attempted to normalize relations with Israel by expressing its disapproval of the tunnels to Lebanon’s government, demanding it prevent further violation of UN Resolution 1701 and deal with the tunnels as soon as possible to avoid escalation.

Senior Russian diplomats stressed that the tunnels stretching from Lebanon into Israel are unacceptable, and that Lebanon must take action.

Moreover, the head of the Jewish Agency, Isaac Herzog, flew to Moscow on Monday for a meeting with with Russian Foreign Minister Sergei Lavrov.

Lavrov told Herzog, a former Israeli minister, that the cooperation between the Russian and Israeli armies would continue in a way that did not jeopardize Russian troops, while also ensuring Israel’s security.

“We are cooperating on regional issues in accordance with what was agreed between Prime Minister Benjamin Netanyahu and Russian President Vladimir Putin,” Lavrov said.

Meanwhile, as part of a PR campaign led by Israeli Ambassador to the United Nations Danny Danon, Israeli intelligence officials have presented before the UN Security Council members a review proving that Hezbollah has violated Resolution 1701 by digging cross-border attack tunnels.

“As the IDF successfully operates to thwart the tunnel threat in the north, we will act to foil any attempt to blame Israel for protecting itself,” Danon said.

“The world is beginning to understand that Hezbollah is violating Resolution 1701 and the time has come to act against it. We will demand the Security Council to recognize Hezbollah as a terror organization and impose sanctions against it to paralyze its terror activities,” the Israeli envoy to the UN concluded.

At the request of Israel and the US, the Security Council was to convene on Wednesday to discuss the existence of the tunnels. Netanyahu on Wednesday appealed to the UNSC to condemn what he called Hezbollah’s “wanton acts of aggression.”