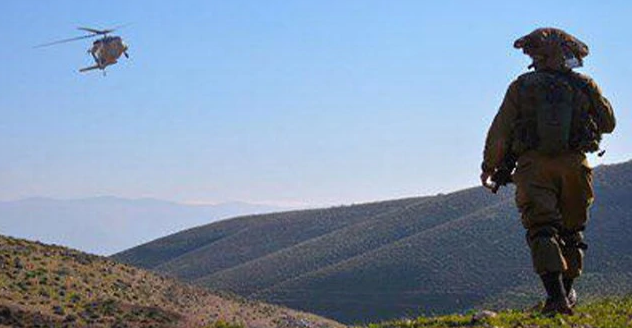 The IDF launched Operation Northern Shield on Tuesday morning to expose and neutralize terror tunnels Hezbollah has constructed along the Israel-Lebanon border since 2006.

It is unclear how many tunnels snake into Israeli territory from Lebanon, but the IDF stressed they were not operational and do not pose an immediate threat to Israel. Work to expose the tunnels was taking place in Israeli territory and without crossing the border, the army added.

IDF officials estimated the operation would last a few weeks, but noted that it depended on how Hezbollah would choose to respond. Israel will also demand to implement its defensive measures in areas along the border that are under dispute, which could lead to protest from the Lebanese government. 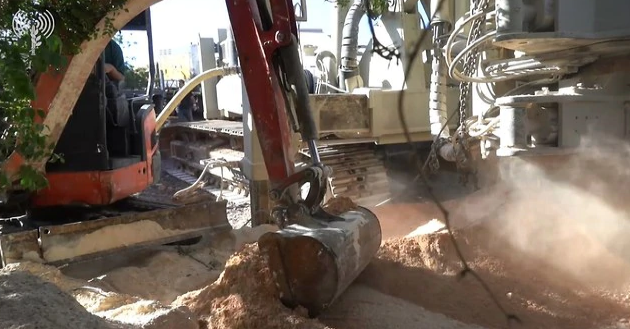 “We’ve been preparing for this operation for two and a half years, with a standing operating procedure led by the IDF chief personally,” the IDF added.

“This is the most blatant proof of the violation of UN Resolution 1701 that ended the Second Lebanon War,” the IDF accused.

“The tunnels pose a risk to the Lebanese residents across the border as well, and we see the Lebanese government as responsible for everything that happens north or the border,” the IDF added. “The fact is that the Lebanese army does not control the area and doesn’t take responsibility for southern Lebanon, while Hezbollah is the one operating in the area and in the Shiite villages. Behind Hezbollah is Iranian knowledge and money, and we will deal with that in the coming days as well.”

The IDF added it had “enhanced its presence and readiness in the Northern Command and is prepared for various scenarios,” but noted there were no special instructions for residents of northern Israel.

Some areas near the border fence had been declared a closed military zone, with most of the army’s operations taking place near Metula. GOC Northern Command Maj. Gen. Yoel Strik held a situation assessment in Metula on Tuesday morning amid the operation.

“We are in complete control over the operation, which is going according to plan, and we are determined to remove the underground threat to the State of Israel,” the army went on to stress.

The IDF released video footage of digging and pile-driving equipment at work in unidentified locations with trees and bushes in the background, carrying out “tactical preparations to expose Hezbollah’s offensive cross-border tunnel project.” 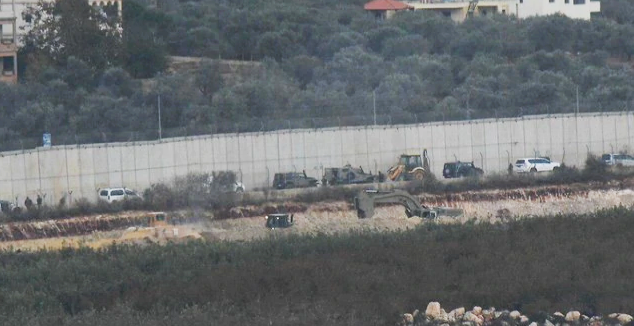 “We see Hezbollah’s activities as a flagrant and blatant violation of Israeli sovereignty,” said Lt. Col Jonathan Conricus, a military spokesman. “This activity is another example of the negative effects of Iranian entrenchment in the region.”

Conricus said that Hezbollah has been developing an offensive plan against Israel that would “shift the battleground into Israel.” The group would use firepower and ground units and “the surprise component of that plan was supposed to be tunnels that would allow infiltrators into Israel.”

Meanwhile, the IDF issued warnings in Arabic to Hezbollah fighters and Lebanese troops not to come near the offensive tunnels Israel was working on neutralizing. “Your life is in danger, beware,” Avichay Adraee, the IDF spokesman in Arabic, wrote on Twitter.

The Prime Minister’s Office has instructed ministers not to make any comments or give any interviews about the operation.

Metula local council head David Azoulay said the only change to daily routine in his town was the fact some farmers were instructed by the army not to come to their plantations near the border fence.

Azoulay, a former engineering officer in the Northern Command, said it was harder to dig tunnels in the north. “The ground here is hard,” he said, adding “I’m glad they found the tunnels now, and that the threat is being neutralized.”

The local council opened a situation room to keep residents updated on the situation, but at the moment it is not fully operational.

Safed Mayor Shuki Ohana has instructed municipal workers to check all bomb shelters in the city and ensure they are ready for any scenario, even though the Home Front Command has not issued any special instructions.

Netanyahu to Lebanon: Stop Hezbollah’s armament or we’ll act
The operation comes hours after Prime Minister Benjamin Netanyahu held a last-minute trip to Brussels to meet US Secretary of State Mike Pompeo, in which the two discussed “ways to halt together Iranian aggression in the region,” including in Lebanon.

Netanyahu asked Pompeo to pass on a message to the Lebanese government, telling them that if Beirut doesn’t stop Hezbollah’s armament efforts, Israel will have to take action. Israel sent a similar message to Lebanon recently through France.

An Israeli government source said the purpose of the meeting was to update Pompeo of the upcoming tunnel operation.

“I want to thank you for everything that you’re doing, for your strong statements on the latest violation by Iran on the ballistic missiles,” Netanyahu told Pompeo. “I look forward to discussing with you how we can together curb Iran’s aggression in the region, in Syria, in Iraq, in Lebanon and elsewhere and to continue our efforts to achieve peace and security for everyone.”

During the 3.5-hour-long meeting, Pompeo “emphasized the United States’ commitment to Israel’s security and absolute right to self-defense and to fighting anti-Israeli bias at the United Nations,” a State Department statement said.

“The Secretary reiterated US support for warming ties and increased dialogue between Israel and its neighbors in the Middle East and Africa, including Oman and Chad. Secretary Pompeo noted the strength of the US-Israel alliance and our multifaceted cooperation. He reiterated America’s resolve in confronting the totality of the Iranian regime’s threats through maximum pressure,” the State Department added.

This evening in Brussels, I met with with PM @netanyahu. It was a joy to wish him a happy #Hanukkah as we lit candles on the menorah. #ChagSameach! I also emphasized our commitment to #Israel’s national security & absolute right to self defense. pic.twitter.com/sF8m6rjsM0

Netanyahu was joined in Brussels by Mossad Director Yossi Cohen, National Security Advisor Meir Ben Shabbat and his military secretary. He returned to Israel immediately after the meeting.

During an address to the United Nations in September, Netanyahu identified three locations in Lebanon where, he said, Hezbollah was converting “inaccurate projectiles” into precision-guided missiles. He warned the group that Israel would not let it “get away with it.”

A few weeks ago Netanyahu also hinted at an upcoming Israeli offensive during a televised address. He offered no details, but said: “I will not say this evening when we will act and how. I have a clear plan. I know what to do and when to do it. And we will do it.”

He said an upcoming security challenge would require Israelis to “endure sacrifice.”

Although its attention has been diverted to violent protests along its border with Gaza in recent months, Israel’s main security concerns lie to the north, along the border with Lebanon.

Israeli officials have long warned the threat posed by Gaza’s Hamas rulers pales in comparison to that of Lebanon’s Iran-backed Hezbollah—a heavily-armed mini-army with valuable combat experience and an arsenal of some 150,000 rockets that can reach nearly every part of Israel.

Hezbollah, founded in 1982 by Iran’s Revolutionary Guards, has grown stronger since the 2006 Second Lebanon War with Israel, notably through its role in the Syrian war fighting in support of President Bashar Assad. With Syria’s civil war winding down, Hezbollah is now free to re-establish itself back home in Lebanon and refocus on Israel.

Over the past decade, Israel and Hezbollah have largely maintained a stand-off—the group has rarely launched attacks into Israel from Lebanon and Israel has rarely struck against the group on Lebanese soil. But in the past few years, Israel has struck dozens of times inside Syria at advanced weapon deliveries to Hezbollah.

What led to the operation?

“Since 2006, we’ve been identifying Hezbollah’s efforts to build defensive tunnels on its territory, activity it has increased after the (Second Lebanon) war,” the IDF said.

According to the IDF, in 2012 Hezbollah began developing a plan of attack inside Israel titled “Conquering the Galilee,” which included conquering Israeli cities and towns. A year later, the IDF examined suspicions the terror group was digging near the border, but did not find anything.

Hezbollah threatening Israel: ‘If you dare attack, you will regret it’

Following the 2014 Operation Protective Edge, when Israeli citizens became aware of Hamas’s attack tunnels in Gaza, residents in northern Israel began complaining about strange noises coming from underground and about unusual structures erected on the other side of the border.

“Any report by any civilian was checked in real time with technological and engineering equipment, and the places we’ve examined have been ruled out,” the IDF explained.

Nevertheless, the IDF realized Hamas and Hezbollah were sharing knowledge on tunnel digging and construction, which led to the establishment of a special task form in the Northern Command in October 2014 to examine the threat.

Starting in 2015, the IDF expanded its defensive operations on the northern border and technological measures were deployed in the area in an effort to detect tunnels. When tunnel construction efforts were detected, the IDF took a series of defensive measures on certain spots along the border.

“All of this allowed us this morning to launch an operation based on a good picture we’ve constructed in an effort to expose (Hezbollah’s) project and neutralize it,” the army said.

In the three years that followed, the IDF continued monitoring the tunnel construction. Several months ago, the army detected tunnels that clearly stretched beyond the Blue Line, leading to Operation Northern Shield.

The Associated Press and Reuters contributed to this report.