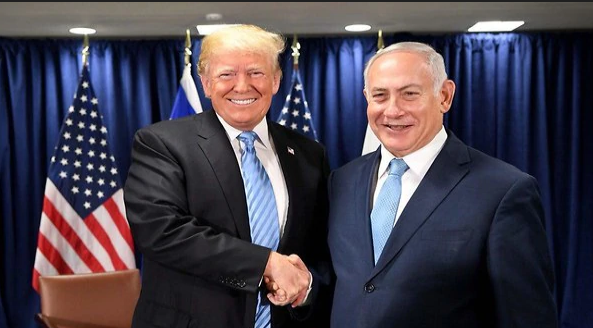 It seems that US President Donald Trump has learned a new magic word: “Israel.” He uses it whenever he has difficulty explaining an unpopular move Washington makes in the Middle East. Therefore, when journalists badgered him Tuesday with questions about Saudi Crown Prince Mohammad bin Salman, despite the Kashoggi affair, he avoided the question and addressed Israel instead. “Israel will be in great trouble without Saudi Arabia,” Trump said. It was a strange statement, to say the least.

Furthermore, in an interview he gave to the Washington Post this week, Trump explained his decision to maintain the presence of American troops in Syria by attributing it to concern for Israel’s security.

In both instances, Israel is indeed part of the American set of considerations, but not the sole or even the primary consideration. Trump and his family are connected to bin Salman, and the United States rakes in huge sums of money when Saudi Arabia purchases American weapons. The rapprochement between Saudi Arabia and Israel is only the cherry on top, not the main course.

Still, Trump finds it convenient to ward off criticism, especially from within the Republican Party, of his forgiving attitude to the Saudi journalist’s killing by using Israel as an excuse. Trump is indeed dealing with the hypocrisy of most Western media outlets, which pretend as if Khashoggi is the first dissident to be assassinated in the Middle East. There is no doubt that the main beneficiary from the fall of bin Salman would be Iran — but Israel should stay out of this saga, certainly in public.

Israel has enough of an image problem in the United States and Europe, and there is no reason to further burden our narrow shoulders with the matter of killing journalists and torturing them in the service of the Saudi royal family. As for the American military presence in Syria, which Israel does indeed have a primary interest in preserving, the American interest is broader.

Officially, the US presence in Syria is intended to destroy the Islamic State of Iraq and Syria (ISIS). In spite of Trump’s triumphant statements, the battered terror organization has not yet been wiped out, as its recent attacks on American forces demonstrate. Meanwhile, Washington has formulated an ambitious anti-Iran policy that includes withdrawing from the nuclear agreement and renewing sanctions.

A withdrawal from Syria would be a lucrative and illogical gift to Russian President Vladimir Putin and the Iranians, and also a waiver of a significant strategic asset. US midterm elections resulted in a win for Democrats, who now rule the House of Representatives, and that does not bode well for Trump in the 2020 presidential elections.

Prime Minister Benjamin Netanyahu‘s Israel has become so identified with the current US administration that it is hard to tell where it begins or ends. It has its advantages, but a post-Trump era is on the horizon—and when that happens, we may find ourselves paying the price for Netanyahu’s total identification with Washington.