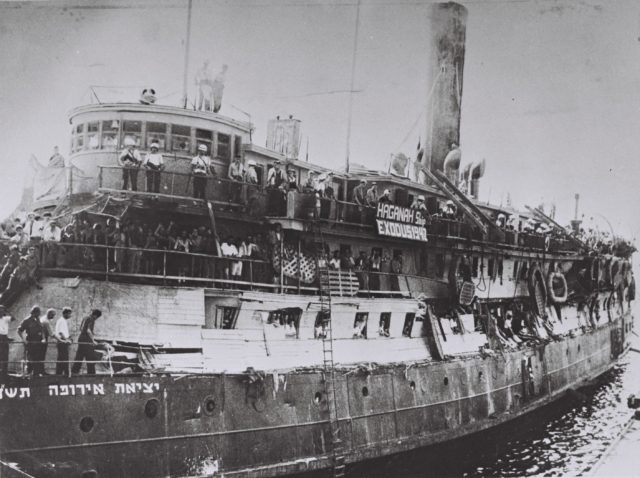 God gave this land to me (to us). The British permitted force against the Jewish illegal immigrants and Trump approves force today (deadly force). History is alive at the Mexican border.

Don’t forget to read Pardon the Turkey in the White House and please enjoy some Kremlinberry with your White House turkey recipe and Golden Shower Russian dressing with your Mueller egg noodles at future gatherings.

The SS President Warfield flew the Honduran flag at sea, but at one point the flag was changed and so was the name of the ship.

The British were humiliated by the blocking of the Exodus which at that moment raised the flag of the Jewish people and Hatikvah was soon heard around the world as fellow Jews supported and cried out for loved ones who had suffered in the Holocaust and in German Displaced Persons Camps (Aliyah Bet included 64 vessels taking Jews to a new home). Cans were thrown at the British forces. And there were casualties which should be a warning to the United States at this moment. The British just like Trump made up things and sent it out to the world to read. And the opening scene of the trailer of the great motion picture Exodus tells us about the great revenge taken against the British for the treatment of Jews on the real Exodus.

Pardon the Turkey in the White House?

The Haganah bought the Exodus which was in “derelict condition”

Ike Aronowitz was the captain (skipper of the Palmach)

Yossi Harel was the commander (commissioner of the Haganah)

The ship was manned mostly by American-Jews

Later retaliation against the treatment of Jews on the Exodus. A barrel bomb exploded in British Headquarters in Haifa on September 29, 1947 (by the Irgun and Lehi) and ten people were killed and fifty-four injured.

Freedom from persecution is found in Go Down Moses, the American Negro spiritual that for over a hundred and fifty years ago has been sung around the world. Harriet Tubman used Go Down Moses to communicate with slaves fleeing Maryland. And the song was used in Gone With the Wind. I use it here as example that we have to let people go out and let people come in who are victims seeking asylum.

Donald Trump praised Melania Trump’s recent trip to Africa, giving her a super A+, but Eleanor Roosevelt had the chance to help Spanish children escape the devastating Spanish War and what that first lady did was lend her name to raise money for milk for the children. Another super A+? Melania does not deserve to be in the White House.

We know of the anti-Semitism that Jews faced at the hands of the British which was also revealed in the motion picture Exodus quite well in the scene with Peter Lawford and Paul Newman, but putting the probable fictitious nature of that scene we know that Trump by his rhetoric and actions has denigrated people from Honduras, Guatemala, and El Salvador (and those other “shithole” countries that he referred to) and has the same bias as the English had.

Trump has placed the old British policies at the forefront of his immigration agenda (and Steven Miller helping to control the strings on that puppet). And I wrote a long time ago that his administration would have been a much better fit in the days of Hitler, Mussolini, and Franco. The tremendous division between his own party line and those who have opposed his order and other orders on constitutional and legal grounds (not to mention moral grounds) is just as dangerous as his threats and actions against the press. Based on much of history either his administration or democracy is taking a nosedive.

We hope that democracy does not fail, because our world has seen enough of military coups that lead to destruction of human values.

This is not the British blockade announcement in 1947. Here is a Trump Thanksgiving too good to miss.

Take a look at Rush Limbaugh’s comments on banning Gone With The Wind as he moves the discussion along from statues of famous Southerners to the movie. Have we not banned Adolf Hitler as we watch countless movies of Hitler, Nazism, and more? We have not banned Mein Kampf and other books. The book is available from Amazon and was recently published in Germany again amid protest.

Banning a statue is just that and the Irish blew up a famous English statue in Dublin fifty years ago. Explosives do that when democracy does not work well enough.

And finally, Trump backs up the Saudi Crown Prince. The Crown Prince says he did not do it (maybe Putin did it)? Could you really imagine Trump standing up to Hitler and Stalin? Hitler says he did not kill millions of Jews. Stalin then say ”I didn’t do it. I never killed anybody in my life.” And imagine them as America’s best allies if Japan had not attacked Pearl Harbor and Trump behind the wheel of America. And we are getting trapped over the sale of arms to Saudi Arabia. Destroy the arms now! And we should decide if Trump has to go or the C.I.A. informants who gave us the report about the role of the Crown Prince.

Breaking news about how Haitians saved a North Carolina turkey town where the famous Butterball turkeys are cleaned.