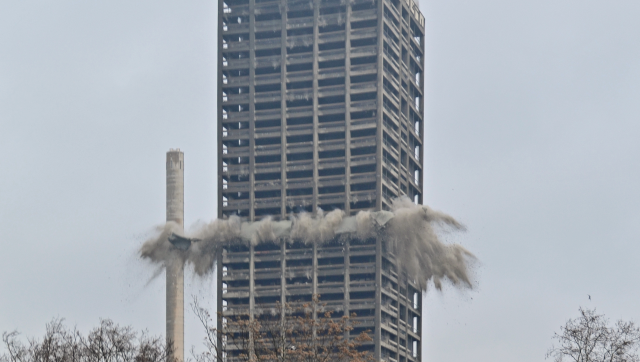 The Trump Corporation knows about cement and cement costs, but Trump’s cement has been noticeably weak.

New York State is one of the driving engines of the economy creating jobs and a Democrat won the Senate with 80 percent of the vote (Senator Gillibrand only had 72 percent six years ago). So much for job creation and winning campaigns.

Let me assure you that the Trump Corporation did not have a high credit rating and Trump now has lost credit with the people. And Trump’s so-called great economy did not work well this time.

There is a surge in voting and Republicans still appear strong for 2020, but that may all change as youth are starting to make a great difference and the votes yesterday were not in Trump’s favor.

In 1963 a poll showed that 63 percent of Americans were paying “little or no attention” to what was going on in Vietnam. Today there is no poll that I can point to, but we can point to Donald Trump’s success attacking the press. Those attacks must have prevented the “blue wave” as we try to learn from the mid-term elections. Trump will be claiming all sorts of victories, including the Oprah Massacre in Georgia and women came out in great numbers to vote for his successes and Obama was defeated in Florida, which is proof that he can beat the Big Os. But he lost the Congress. Why?

It’s about just who Trump is. He was the cement that held the Republican Party together (as he bested other Republican candidates in 2016). But the cement broke down and eroded as he became president of his base. New voters could have played a part as well. The Electoral College could not keep Trump away from defeat in 2018 and 2020 is another thing altogether. Will there even be a 2020 for Trump? As a write-in candidate, he could win just as the Republican candidate just won in Nevada, a candidate who is dead and who was a brothel owner.

We can begin with medical coverage, immigration, taxes, hate and anti-Semitism, unemployment and jobs, and foreign policy and see the flaws that have been glossed over by Trump’s insistence that “fake news” is destroying America. And never forget Parkland and Gun Control.

I get emails from various conservative types and Trump supporters. I read what some of them have to say. At this critical moment the things that I read seem to be carbon copies or compositions that one student has copied from another student. Those compositions are about Trump not being anti-Semitic.

I was concerned about Trump before he took office and that his administration was going to increase anti-Semitism. It was the wrong formula from the beginning and not something created by the media (CNN, etc.). The focus, which is my focus, should be to provide solutions and plans of action, which I do not see from Dennis Praeger and and Rabbi Shmuley Boteach. And thankfully my own outreach has planted an important seed. The Tree of Life will grow as our nation unites now and forever to wipe out our adversaries. Leave the press alone!

With all the talk about Minister Louis Farrakhan and denouncing him, where is the mention of Robert Jeffress, the evangelical adviser to Donald Trump. Abe Foxman, former director of the Anti-Defamation League tells us that three neo-Nazi and Right-Wing candidates (Republicans) garnered over 200,000 votes between them and those numbers resulted in 26.5, 38.2, and 28.1 percent of the vote in three Congressional elections, which was ten times more votes than Hitler achieved shortly before taking power.

Trump’s move to mobilize the military has been met with action take by the generals which will prevent harm to people in the caravan coming to our borders. Trump’s carelessness is being overridden. Militias that may include hate groups have to be restricted from those areas near the border to prevent conflict which would be disastrous even to the Trump Administration. The weak “Stop It” that Trump spoke on 60 Minutes as president-elect needs the refinement of a real, powerful leader who is intent on protecting life and maintaining the rights of people to seek asylum.

Our medical system is not the best system in the world as conservatives have repeatedly told the voters the opposite. We need tremendous advancements in the name of We The People. In states that have voted Republican, there is an acceptance that things will not get better as the care of constituents continues to suffer. It’s always about We Against Them and that has to finally stop. And the Republicans after all these years have no plan ready to replace Obama Care.

The Republican administration that gave Kansas its tax cuts and hurt the economy of that state has been eliminated as Democrats have won. The rest of the nation needed to learn from that and didn’t. The Trump tax cuts have increased the nation’s national debt as predicted and suddenly the voters are not being told that that debt will be paid for by your children. Why? Trump won and his friends want to keep him.

I just asked Michael Bloomberg to speak out about the $24 billion Trump Plaza Wall that we only become a playground for people crossing the border. That wall should be stopped not only by the new Democratic majority in Congress, but also by Republicans who must come to their senses. I call upon Congressman Kevin Mc Carthy, the author of the bill, to withdraw the bill now. Save us from the embarrassment of a wall that the Mexicans did not pay for and that the American people should never have fallen for. The idea of the wall must fall.

In foreign policy it appears that after triumph in North Korea (which had so many us perplexed and there was evidence that behind the scenes people were toning Trump’s rhetoric down), North Korea in the last few days said it might return to nuclear testing because of Trump’s sanctions.

In Israel there was that break with the past and making Jerusalem the city where the American embassy is, provoking the Palestinians and deaths on both sides. What has taken place in the Saudi embassy in Turkey should be an eye opener to the possibilities anywhere. In Afghanistan the attempts on an American general in Afghanistan and the killing of the former mayor of Ogden, Utah in by someone he was training are telling. Also in Turkey, the Russian ambassador to Turkey was killed in a museum by a Turkish police officer assigned to protect the ambassador. These are things to absorb.

Both Lyndon B. Johnson and Richard Nixon portrayed themselves as “peace” makers during the Vietnam War and now by moving the embassy in Israel Trump makes the same claim specifically about the embassy. Jared Kushner has been working on the plan for two years and there is no peace. My own view is that there cannot be a deal for peace and I’ve been connected to this subject since the 1980s. And Trump is no peace maker.

Then there is MS-13 and his support of police that the Department of Justice has been critical of. He is misrepresenting what is actually going on by commending a police department that needs improvement. So he made you believe that America is Great Again. See how the police were exposed on Sunday in my community in Jewish Business News.

I asked economist Robert Reich to form a group of economists to tell us what is going on with Trump’s economics. He did not reply, but I found his article today which I am sharing with you America Rejects Trump. And let me share something equally important with you about full employment that I have known about for years.

Milton Friedman, the economic guru of Republicans and conservatives, spoke about cutting unemployment significantly over forty years ago. To achieve that all that was needed was to eliminate the minimum wage and pay people less. In this video that I am sharing please substitute your own ethnic or racial background instead of the specific race mentioned and you will get a better picture of what has been going on all these years. The Minimum Wage video of Milton Friedman. I see today the more and more teenagers are working everywhere and often they get more than minimum wage and the reason is people want more. Your friends and family want more and not less. Imagine working for less than minimum wage. And imagine being told that you could not even get food stamps and/or other supports.

Trump has finally fired Jeff Sessions who recused himself from the Russian matter. The acting Attorney General is now Matthew Whitaker who previously criticized the Mueller Investigation. There will be much tension for weeks or more unless Whitaker makes a strong statement right away.

I will remind you of the Dreyfus Affair where the conspirators did whatever they could do to undermine a fair decision. The French military and the judges were in collusion in this matter and it almost brought down the French government. I look forward to hearing Whitaker tell us that the investigation will proceed, especially since Robert Mueller has found proven criminal behavior. We welcome more if this nation is going to survive.

And Whitaker cannot swear “loyalty” to Trump at this time. The statement Whitaker made last year could and should be corrected right now. This is about We The People. Rep. Adam Schiff, the incoming chairman of the House Intelligence Committee, made it known that “interference with the Special Counsel’s investigation would cause a constitutional crisis and undermine the rule of law.”