Senator Elizabeth may not have a case against Donald Trump due to the fact that he was not acting as a private citizen. He may be protected from being sued for $1 million. She clearly would have a case, I believe, if Trump had been acting as a private citizen. There was a request made and money was mentioned if she complied and that is what a contract is about. Of course she would have to try to collect, the money which we all have to do in court. But Trump should pay up. I am not going to suggest that Michael Cohen set up another payment for Trump either.

If there was a question on a game show that read Which woman’s DNA revealed Native-American ancestry? Michelle Obama, Melania Trump, Elizabeth Warren are the choices. The answer Elizabeth Warren when chosen would be correct the and the contestant would be awarded money for answering correctly. There would not be any call to “lock her up” or call her “Pocahontas” from anyone. Trump in an article from CNN by is called out for bullying and the article even points out that Warren’s Democratic opponents could use the findings against her.

Her ancestry goes way back and it is clear to me that their was importance attached to that ancestry. It was not her fault that the family did not know more about ten generations back.

In my own family history, the legend says that we once lived in Spain and then the family moved to Eastern Poland. Is it possible that we went from Galicia to Galicia? Who knows, but it seems that our history dates back to the Inquisition in Spain and the expulsion. 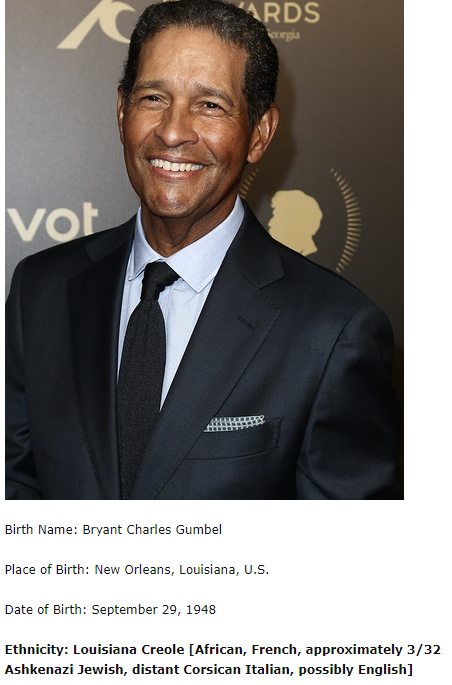 Recently Bryant Gumbel was on the show about ancestry of Professor Henry Gates and it was told that he came from Ashkenazi Jews, but in his case there was a history that was written. Here it is. He is considered 3/32 Jewish based on the information. And I am certain that there are many people who will say that he is not Jewish, he is Black. There were formulations in Louisiana centuries ago where people were categorized by the amount of Black heritage or blood.

Yes, Sammy Davis, Jr. was Jewish, because he converted to Judaism. But Jews and Bryant Gumbel could clearly reach out to each other in a new way if Gumbel desired it. It’s not entirely about being a Israeli-Jew or being born to a Jewish mother.

Then there was the statement of Chuck Hoskin, the Secretary of State of the Cherokee Nation, who said that as a non-citizen that Elizabeth Warren would be entitled to nothing. This controversy must revolve around a statement based on hearing that Elizabeth Warren was seeking something in the past, which apparently she was not. Hoskin fell into a bad trap, which is something that no secretary of state should do. His father is a Democratic member of the Oklahoma legislature and it appears that his involvement is just another unfortunate event in the Trump presidency and the statement may have nothing to do with the Republican agenda in Oklahoma.

I can remember meeting a Bolivian in 1962 who called me “landsman” (a fellow Jew) upon finding out that I am Jewish and he told me that his father is Jewish. This is just one way for people to reach out in brotherhood with each other. It is a way to develop a relationship. I am sure that the Cherokee do the same thing and do not berate someone who claims ancestry.

Trump on 60 Minutes: A Great Disaster

Those of us who know important things about Jews who fit in the type of category, more or less, that Warren is in know that people in the Southwest found out about being Jewish because there was a tradition of keeping some rituals in the household. The same thing took place in China and I remember calling a Rabbi Stampler of New Jersey who invited some of those Jews to the United States. Israel knows the same history from Ethiopian Jews as well. Trump knows just creating jobs, fooling the people, and making a mockery of himself on 60 Minutes among other things (the list is just too long for this sentence).

I knew a Frenchman who was brought up Catholic and immediately converted to Judaism after finding out that his parents were destroyed as a result of the Holocaust. I could go on and I am sure that there are some Jews who can write a book on the subject. Then there are the Jews around Trump, from Jared Kushner to Trump’s cabinet members and members of Mar-A-Lago. They seem to be out for the “win” only and human decency is taking a backseat in their minds and hearts.

I would suggest that the Cherokee Nation join in and issue a correction of the statement made by Chuck Hoskin, because it does not apply to Elizabeth Warren. Keep in mind that Donald Trump was just floating the idea that a “rogue” killer or killers took out Jamal Khashoggi and just as soon as that came out of his mouth we started to learn that the Saudis government was responsible. No correction made by Trump to the American people? Just another statement, this time of fact. Let’s not distort the truth, Warren has some Native-American ancestry that cannot be denied.

Professor Gates is half-Irish himself. When Muhammad Ali found out about his Irish roots after a going through a lot as an African-American, he went to Ireland to visit the town of Ennis where he received the warmest welcome from the people. Ten minutes of the Greatest and great people. This is a lesson for all time. Trump must fall in 2020 or before!

Then we can look at length at Hitler’s Germany for supporting information. Would Bryant Gumbel have survived then? He would have had two strikes against him or more. What Hitler did was political and what Trump is doing is political. And the beat goes on in his cabinet and among his donors as we move into the mid-term elections.