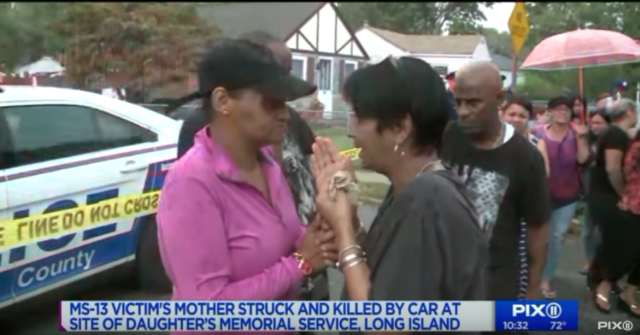 Not enough has been discussed by the community that has experienced many tragedies. Even mother and daughter have been killed at the same spot in Brentwood. I was going to reach out to Evelyn Rodriguez just before her death on the mean streets of Brentwood.

With all this talk about gangs, crime, poverty, and the role of government, throughout the centuries in most countries the same mistake have been made. There is no “Potato Famine” where I live, people can eat potatoes at all the fast food restaurants, but there is poverty that has not been dealt with properly. The Democrats are fighting with others for a $15 minimum wage, universal pre-k and child care, and more. The reality is that people are still making much less, cannot afford housing and other living costs, and are poorly educated without even the minimum education that they need. This is America and the Republicans are usually worse as they want to balance the budget, cut programs, and prove they are the best by cutting taxes.

I have helped an undocumented immigrant earn a Green card by helping her pass a required language exam in the medical field where she was working.

I have helped an immigrant who faced death in his country when I referred him to an immigrant agency in New York City where he received free legal help.

Would I help members of the MS-13 with the GED? I did write a proposal for a grant that I submitted to the Justice Department which was rejected?

Would I harbor a member of the MS-13 in my home? How many times have we heard about Pelosi this or Pelosi that giving sanctuary to gang members?

There have been times as I sat at my desk typing that I thought that I could be attacked by MS-13 and no I want to live. But helping low level gang members before they become killers was one of my goals. And it is the goal of people in my community who know that reducing the membership before it is more powerful and more dangerous is a part of national security.

In 2003 I quickly helped a young Dominican female pass the GED and she went on to work as a CNA in hospitals earning a good salary and supporting her children.

Yesterday an article about the role of the police in relation to MS-13 appeared in ProPublica, but I found it on the website of LI Wins, made a phone call to that organization and nobody returned the call.

There were allegations of misconduct by Suffolk Police in helping the Latino community. Police bias, it is being reported, is a factor in failing to adequately fight MS-13 and contributing to murders. Police were secretly recorded by the parent of one of the youths who was murdered.

One of the problems was the police did not provide an interpreter. Councilwoman Monica Martinez knows that I spoke at the Suffolk County Legislature years ago asking that firemen and others be given a course in Spanish. When I called the police at that time, I was told that Mr. G who is well known on Long Island was helping the police with Spanish. But that was just one meeting with staff. Just one meeting. It was my hope that dozens more police would become fluent in Spanish with a new initiative.

The Brentwood and Central Islip communities have been plagued by MS-13 for decades now. I learned about it probably in 2002 when I was teaching in the Consulate of El Salvador and I opened the class to everyone in the community. At that time the MS-13 comprised less than one percent of the Salvadoran community. There were 10,000 members and there still are only 10,000 members. The Salvadoran community was being blamed back then for next fixing the problem (in schools and communities). I wrote about gang members raping girls in clubs in 2004 and nobody listened to me. Here are some quick sound bite mistakes made by this community.

The GED testing program was eliminated in Brentwood High School because proctors wanted more pay (the state of New York could not raise the pay).

The Adult Education program in Central Islip back then did not even have one diploma to show for one year.
Assemblyman Phil Ramos’ office did not do anything to advocate for the community.

Councilwoman Monica Martinez knew my position about how to help the community and she chose to do nothing. She was a teacher and administrator in Brentwood High School, but she was really out of touch with these critical needs in the community.
Brentwood organizations just advocated for their own personal or individual causes and programs such as graffiti removal, theater, and after-school programs.

The F.B.I. knowing that this kind of help was needed, did nothing about it after being called in by our congressman.
County Executive elect Steve Bellone did not heed my urgent pleas just as former County Executive Steve Levy had not. Levy sparked more anti-immigrant behavior in communities.

When a cabinet member of Bellone told me over the phone “I don’t care how long a person takes to earn his GED,” I reported that to Bellone’s office because I proposed helping gang members get their GED faster to get them off the mean streets.

Take into consideration that New York State has 2.85 million adults who did not have any diploma. Take into account that New York State has lost over 200,000 diplomas since 1993 when the assembly made the test free. Take into account that my favorite politician (from New York City) said as a panelist my panel in the state government building that the representatives in Albany were not to blame and I repeated that they are to blame right in front of the audience. If Donald Trump came to me and said that we are going to give more help to people, I would just say to him “Get Lost.”

Giuliani was mayor of New York back in 1993 and things were great compared to today and not because of Giuliani. He could have advocated for the people and the state could have gone back to a low-cost fee and free testing for people on social services instead of all free and never increasing the amount of testing money since 1993. Do you think that the people named in this article will finally do something to help slow down the pipeline to prison among our youth who fall through the cracks?

There will be a series of articles in ProPublica by Hannah Dreier to pay attention to. Pay attention to the lies and distortions of Donald Trump.

I recently called upon Lebron James to join forces with Parkland parents and I wanted the parents of Kayla Cuevas and Nisa Mickens to be there too. Lebron James has been contacted and we hope to discuss joining forces this coming week. Trump has provided them with publicity but that is not enough. The community has to be cleaned up in many ways and that he won’t do to Make America Great.