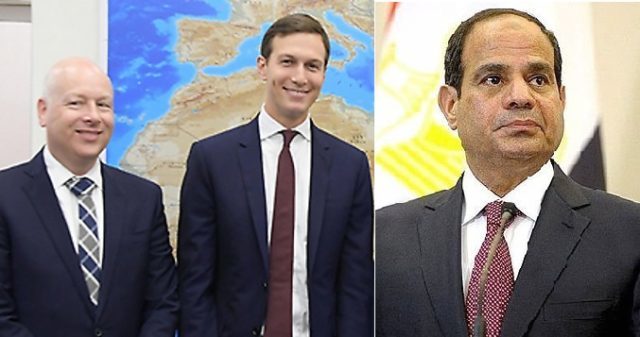 US President Donald Trump’s Mideast team arrived in Cairo on Thursday, the White House said, the latest stop in a regional tour to discuss a blueprint for an Israeli-Palestinian peace deal.

Trump’s son-in-law and senior adviser Jared Kushner and Mideast envoy Jason Greenblatt met with President Abdel-Fattah al-Sisi. The visit comes as part of efforts to overcome the towering obstacles to the deal the team is in charge of drafting.

Egypt airport officials, speaking on condition of anonymity because they were not authorized to brief the media, confirmed their arrival in Cairo earlier Thursday and said the visit would last a few hours.

The meeting touched upon “the need to facilitate humanitarian relief to Gaza,” the White House said in a statement. The blockaded and densely populated Gaza strip, ruled by the Palestinian Hamas terror group, has sunk into a deep humanitarian crisis, especially after the flare-up of violence with Israelis amid protests at the border in recent weeks.

Kushner has been leading efforts to broker a peace deal between the two sides. US officials have said the long-awaited peace plan is near completion and should be released this summer following several postponements.

Jordan’s King Abdullah is set to meet President Trump next Monday to discuss, among other things, Syria’s southern border with Jordan—a particularly sensitive area for Israel.

A statement about the scheduled meeting said that Trump expected to reinforce already robust ties between the two countries. The leaders will also discuss mutual concerns in the region, among them terror, the Iranian threat and the eight-year civil war raging in Syria. The two will also focus on advancing the US-led peace push between Israel and the Palestinians.

Jordan is considered a key player in bridging the widening difference between Israel and the Palestinians as the US prepares to reveal its long-awaited peace plan.

King Abdullah could play a pivotal role in convincing the Palestinian Authority leaders, including President Mahmoud Abbas, to return to the negotiating table despite statements signalling that they have no interest in considering anything proposed by the Trump administration.

Moreover, the Hashemite Kingdom can play a central role in creating a coalition to rehabilitate the economically hamstrung Gaza Strip.

Jordan also shares Israel and the US’s concerns over Iranian ambitions to entrench itself militarily in Syria.

On the domestic front, the White House is also expected to throw its financial weight behind the Jordanian king as his country undergoes severe economic hardships.

During Kushner and Greenblatt’s meeting with Netanyahu, the three are expected to focus primarily on projects aimed at remedying Gaza’s humanitarian crisis, a plan which is expected to center on raising a huge financial injection from Gulf states of half a billion dollars.

Kushner and Greenblatt meet with King Abdullah to talk peace

The three will also consider whether the time is opportune to unveil Trump’s plan to achieve what he has described as the “ultimate deal.” Greenblatt and Kushner will not be meeting with Palestinian representatives.

The Trump team met Tuesday with Jordan’s King Abdullah II and Wednesday with Saudi Arabia’s crown prince, Mohammed bin Salman, who acknowledged the talks only after the fact. They were expected to visit Qatar and Israel, but have not released an official itinerary.

Thursday’s meeting with the US delegation also dealt with increasing Egyptian-American cooperation, the White House said without elaborating.

Egypt’s presidency released a statement after the meeting saying it mainly discussed the Palestinian-Israeli peace efforts and cooperation. It said the meeting was attended by Egypt’s Foreign Minister Sameh Shoukry and the acting head of general intelligence Abbas Kamel.

Washington gives Egypt some $1.3 billion in annual military assistance and hundreds of millions more in civilian aid that is linked to Egypt’s 1979 peace treaty with Israel, and underpins a US-Egyptian security relationship that is now mostly aimed at fighting terrorismBy Ynet News and Associated Press