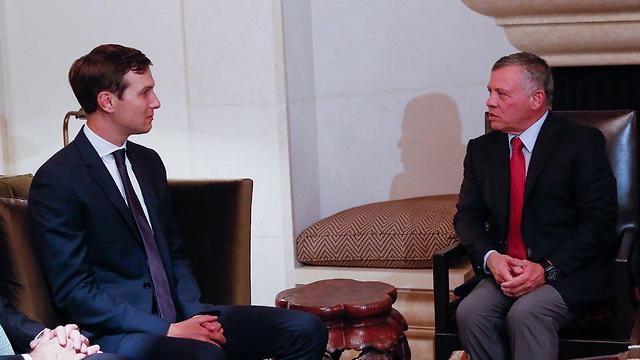 US President Donald Trump’s son-in-law and special advisor Jared Kushner and the US special Middle East envoy Jason Greenblatt met with Jordan’s King Abdullah II on Tuesday to discuss the peace process between Israel and the Palestinians and a number of other regional developments.The White House released a statement saying that the meeting in Amman centered on the much-anticipated Israel-Palestinian peace proposal which is expected to be rolled out in the near future by the Trump administration.

The discussions also focused on bilateral relations between the US and the Hashemite Kingdom, on regional developments and on the humanitarian crisis currently besetting the Hamas-ruled Gaza Strip.

According to the Jordanian Petra news agency, the meeting, which was held at the Al Husseiniya Palace in the capital, also dealt with strategic ties between the two countries and coordination between them in a host of fields.

“His Majesty stressed the need to reach just and comprehensive peace in the region that enables the Palestinian people to fulfil their legitimate aspirations to establish an independent Palestinian state on the 4 June 1967 lines, with East Jerusalem as its capital,” the Petra news agency said.

“The King underlined the importance of breaking the stalemate in the peace process to relaunch serious and effective Palestinian-Israeli negotiations based on the two-state solution, the Arab Peace Initiative, international law, and relevant UN resolutions,” the statement continued. “His Majesty also noted the important role of the United States in this regard.” 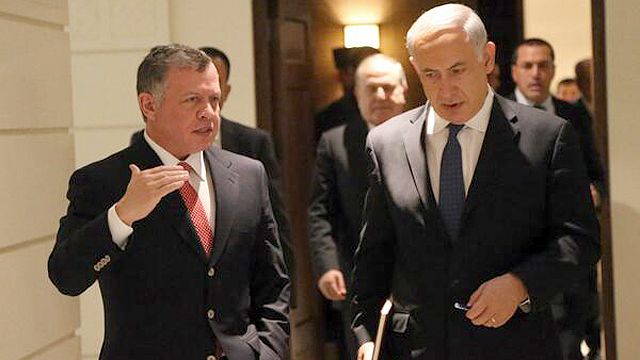 The King reaffirmed, it added, “that the subject of Jerusalem must be settled as part of final status issues, as the holy city is key to achieving peace in the region.”Prime Minister Benjamin Netanyahu also met with King Abdullah in Amman on Monday, in what was their first encounter since a diplomatic spat erupted following a deadly incident last year involving an Israeli security guard and two Jordanians at the Israeli embassy in the Hashemite Kingdom.

On Monday, Prime Minister Benjamin Netanyahu met with King Abdullah, in what was their first encounter since a diplomatic spat erupted following a deadly incident last year involving an Israeli security guard and two Jordanians at the Israeli embassy.

According to a statement from the Prime Minister’s Office, the two leaders “discussed regional developments, advancing the peace process and bilateral relations.”

The statement also said that Netanyahu “reiterated Israel’s commitment to maintaining the status quo at the holy sites in Jerusalem.”

According to the Petra news agency, King Abdullah, “stressed the need to make progress in efforts to resolve the Palestinian-Israeli conflict on the basis of the two-state solution and in accordance with international law, relevant UN resolutions, and the Arab Peace Initiative.”

On Saturday, Kushner and Greenblatt met with UN Secretary-General António Guterres and the US Ambassador to the UN Nikki Haley to discuss Washington’s efforts to promote Israeli-Palestinian peace and ameliorate Gaza’s humanitarian crisis, according to the White House.

Kushner, Greenblatt, Haley, and Guterres also discussed recent votes taking place in the UN—the General Assembly voted Wednesday in favor of condemning Israel for “excessive use of force” against Palestinian civilians in Gaza and voted down a US proposed resolution condemning Hamas over the recent escalation of violence in Gaza.

Nabil Abu Rudeineh, a spokesman for Palestinian President Mahmoud Abbas, attacked the US plan, calling it “meaningless” and arguing it “will achieve nothing.””Without the agreement of the Palestinian people, the fate of this round of meetings will be complete failure,” he added.