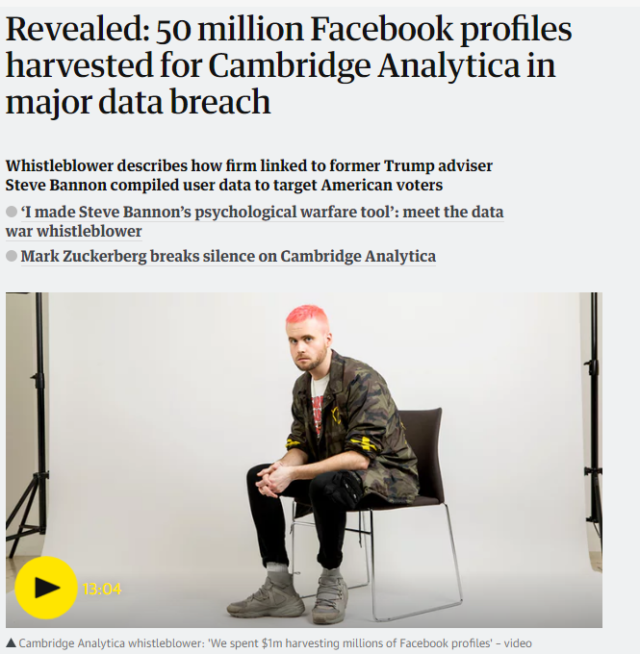 The Guardian first broke the story of Cambridge Analytica

Roughly eight weeks after The Guardian first broke the story of Cambridge Analytica systematically harvesting data from millions of Facebook users in order to manipulate them ahead of the 2016 U.S. presidential election and the U.K.’s Brexit referendum, Facebook has wiped out all of the losses its share price had incurred as the scandal unfolded.

On Thursday, Facebook’s shares closed at $185.53, 0.2 percent above the last closing price before the story broke on March 17. Following the Guardian’s revelations, Facebook had lost $50 billion in market capitalization in two days and, at its lowest point, the company’s share price had dropped nearly 20 percent from its pre-scandal level.

Following a series of public apologies and positive first quarter results, it appears as if Wall Street has moved on from the scandal. Perhaps more surprisingly, so have many Facebook users, at least according to a recent survey conducted by Ipsos on behalf of Thomson Reuters.

Despite the Cambridge Analytica scandal still swirling around Facebook, resulting in a grilling at the hands of the U.S. Congress for CEO Mark Zuckerberg and the spurring on of the #DeleteFacebook movement, the company recorded strong quarterly figures for Q1 this year – including user growth. In this chart though, we’re concentrating on revenue and profit. Although there was a dip in revenue compared to the previous quarter, net income rose and both figures are healthily up on a year-on-year basis.

In response to the Cambridge Analytica scandal that saw the data of millions of Facebook users legitimately harvested and used to manipulate people ahead of the U.S. presidential election, many experts anticipated a mass exodus of users from Facebook. Now that the smoke has cleared and things have calmed down a bit, it appears as if, luckily for Facebook, most users are actually unfazed by recent events. According to an Ipsos poll conducted April 26-30 on behalf of Thomson Reuters, the vast majority of Facebook users in the United States haven’t limited their usage of the platform in response to the scandal.

While 18 percent of Facebook users responded that they use it less than they used to and another 4 percent have stopped using the site altogether, just 1 percent deleted their account recently. Conversely 26 percent of those polled have increased their Facebook usage and another 49 percent haven’t changed how frequently they use the world’s largest social media platform. While it’s hard not to read the results in connection with the Cambridge Analytica story, it should be noted that the respondents weren’t explicitly asked whether they changed their behavior in response to it. They were merely asked whether they had “recently” changed how frequently they use Facebook.

In this article:facebook, Wall Street, Finance