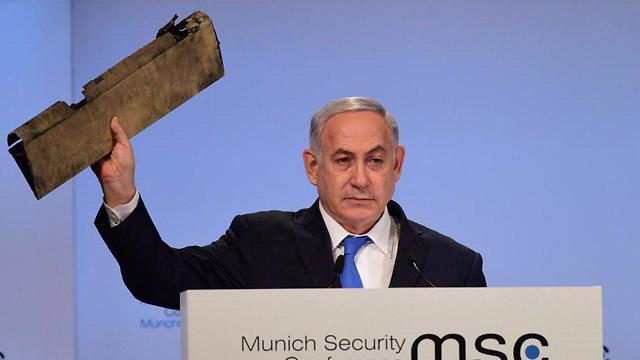 Prime Minister Benjamin Netanyahu said on Sunday that Israel would act against Iran, not just its allies in the Middle East if needed, reiterating that Tehran was the world’s greatest threat.

Holding a piece of what he said was an Iranian drone after its incursion into Israeli airspace earlier this month, Netanyahu told the Munich Security Conference: “Israel will not allow the regime to put a noose of terror around our neck.”

He warned his listeners that they would soon be addressed by the “smooth-talking mouthpiece for the Iranian regime,” Foreign Minister Mohammad Javad Zarif. “I give Mr. Zarif credit. He lies with eloquence.”

Holding up the debris of what he said was the Iranian drone shot down by Israel, Netanyahu taunted Zarif.

“Mr. Zarfif. Here’s a piece of that Iranian drone. I brought it here after it was shot down, or what was left of it. Do you recognize it? You should do. It’s yours,” he said. “You can take a message back to Iran. Do not test Israel’s resolve.”

Netanyahu began his speech by reminding his listeners of the infamous 1972 Olympic massacres which resulted in the death of eleven Israeli athletes by Palestinian terrorists, and also compared the 1938 Munich Agreement signed between Britain and Nazi Germany as part of the appeasement policy with the Iranian nuclear deal.

“Eighty years ago, another event took place here with far-ranging consequences,” Netanyahu said. The architects of the Munich Agreement, he stressed, were “noble men who chose to appease Hitler’s threat rather than confront it.”

The concessions to Hitler, he added, only emboldened Hitler’s regime and set the path to war. “Those well-intentioned leaders made a war inevitable.”

Dedicating the majority of his speech to the European diplomats to the Iranian threat, Netanyahu made clear his country’s disdain over Poland’s recently ratified Holocaust Bill that outlaws blaming Poland as a nation for Holocaust crimes committed by Nazi Germany.

Momentarily switching to Hebrew, Netanyahu then reverted back to English as he emphasized that Israel would always remember and would never forgive those who carried out the Holocaust and the Nazis’ collaborators. “We will not forget, we will not forgive. We will always fight for the truth,” he said.

While drawing comparisons between the Munich Agreement and the Iran nuclear deal signed under the Obama administration, Netanyahu sought to highlight the fundamental differences between the Iranian regime and Nazi Germany.

“Let me be clear. Iran is not Nazi Germany. There are many differences between the two … Jews are not sent to the gas chambers,” he said, adding that “there are obviously many other differences. But there were other similarities, he said, namely that Iran “makes absolutely no bones” about its intention to eradicate Israel.

Netanyahu warned of the dangers posed to the world by an nuclear-armed Iran. Iran’s aggression will be unchecked and it will encompass the entire world. Look at what their doing now. Imagine what they’ll do if they have nuclear weapons.