He may have lost in the primaries, but Senator Bernie Sanders hasn’t lost any of his fight, might, or bight. Sanders is taking the lead in going against Donald Trump’s cabinet nominees.

NowThis sat down with @BernieSanders in Michigan this weekend to discuss the fight to save the Affordable Care Act pic.twitter.com/jQL7NAQKGc

Betsy DeVos is Donald Trump’s nominee for Secretary of Education. Democrats, like Sanders, are not happy with this pick because DeVos is an advocate of private charter schools and she and her husband founded All Children Matter, a PAC which works to promote such schools over public education. Democrats feel that someone who opposes public education should not be put in charge of it.

But Senator Bernie Sanders, who serves on the Senate Health, Education, Labor and Pensions (HELP) Committee which is responsible for reviewing the DeVos nomination, is also concerned about her donations to Republican candidates. 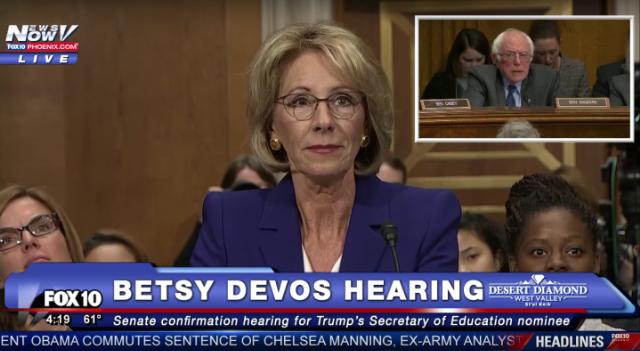 During her confirmation hearing Bernie Sanders asked Betsy DeVos point blank, “Do you think that if your family had not made hundreds of thousands of dollars in contributions to the Republican Party that you would be sitting here today?”

DeVos responded, “I do think there would be that possibility. I have been working hard to be a voice for students and to empower parents to make decisions on behalf of their children, primarily low-income children.”

According to The Washington Post, Betsy Devos and her family donated $2.7 million to Republican candidates in 2016.

But Bernie Sanders did try to find common ground with DeVoss, asking her if she would work with him to forgive the billions in student debt held by Americans and to make public colleges tuition free. To this she responded, “I think that’s a really interesting idea, and it’s really great to consider and think about, but I think we also have to consider the fact that nothing in life is really free.”

To the tens of thousands who stood up for #OurFirstStand, thank you. This is not the end of the fight. This is the beginning. pic.twitter.com/ekvGDLlAvN

Then there is Republican Rep. Ryan Zinke of Montana, Donald Trump’s candidate for Interior Secretary. Bernie Sanders grilled Zinke for his positions on climate change during the Congressman’s confirmation hearing before the Senate Energy and Natural Resources Committee where the Senator also serves.

While Ryan Zinke acknowledged that the climate is changing, he also said that whether limiting the use of fossil fuels from now on will make any difference in the future is not clear. As reported by CNN, Zinke said, “I think where there’s debate is what that influence is and what we can do about it. I will inherit USGS. There’s great scientists there.”

Senator Sanders also took the opportunity to criticize President Elect Donald Trump’s plans to expand oil drilling in America for the environmental impact that t would have.

As for embattled FBI Director James Comey, Bernie Sanders wants him to resign. The Senator made the call on a recent appearance on ABC’s “This Week” saying, “I think he should take a hard look at what he has done. And I think it would not be a bad thing for the American people if he did step down.”

“I think that Comey acted in an outrageous way during the campaign, ” added Sanders. “No one can say that this was the decisive and this was what elected [Donald] Trump, but clearly his behavior during the campaign in terms of what he said in the week or two before the election was unacceptable.”

While Senator Charles Schumer of New York may be the Democratic Minority Leader, Bernie Sanders is making a case to be the real face of the Democratic opposition to the Donald Trump Administration.