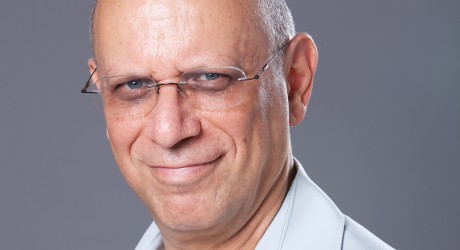 Tu B’Shvat was last week, and in addition to being the Jewish New Year for trees, the day also marks the week in which Israeli students receive their mid-year report cards. These paper report cards have not changed significantly since the readers of this newspaper sat in classrooms themselves, but report cards are merely a symptom of the prevailing conservatism.

Most of the systems we live with – health, transport, and communications, for example – have evolved, and undergone a revolution, thanks to innovative technology, but the educational system has been left in the dust.

The frontal format, where a teacher stands at the front of a classroom filled with dozens of children, is still a reality for hundreds of millions of children who are just waiting to be saved by the bell. In recent years, a new trend has emerged, which is creating an interface between high-tech and teaching, but, for now, the computer-for-every-child program is not yet fully underway.

In many classrooms, there is only one computer, and sometimes there is not even Internet access. The fact that many students have powerful computers in their pockets, in the form of smartphones, does not change the equation.

Many educational institutions don’t know how to maximize the potential of computers. The system fears that unintelligent use of technology will lead to the erosion of teacher status, and educational material. This dilemma confounds many countries that are faced with a situation in which students can find any bit of information, even those that their teachers know nothing about, in the blink of an eye.

Education is considered to be one of the most important means for Israel to maintain its relative edge in the international arena, and to develop a knowledge-rich industry. Many high-tech executives fear the consequences of inadequate educational systems. One such executive is Dov Moran, the man who invented the USB flash drive (DiskOnKey), and sold M-Systems to Sandisk for $1.6 billion.

Moran has since invested in a series of ventures, including Modu, which developed a mobile device and then closed, and the smart-TV company Comigo. Moran is currently involved with 15 companies, but he puts special effort into Learni, which operates in the growing field of educational technology (EdTech).

“My thing, ” Moran told “Globes” in an exclusive interview, “is that when I don’t understand something, I just have to understand it. When I was exposed to the state of the educational system today, I said to myself, ‘I must understand what is not working there.’ I was troubled by Israel’s decline in the OECD education rankings in math, science, and reading.”

“Where is Start-Up Nation in the educational system?” he asked. “I saw a study in which Israel was in the bottom five countries in the developed world in terms of percent change in educational system computing levels.”

Moran has met with many figures in education, including outgoing Minister of Education Shai Piron. “The most interesting meeting I had was with my former high-school principal, of the Ohel Shem high school in Ramat Gan. He was a senior military official in the IDF Signal Corps., and he decided to become a principal. He took me to a classroom, and to the computer lab, and from this conversation I had a few realizations.”

My first realization was that teachers are facing a real image problem. “When I was in high school, I was very influenced by my teachers, not less than by my parents, but today, teachers are perceived as idiots, and the fact that they are treated like idiots turns some of them into idiots.”

My second realization had to do with the relationship between teachers and students. “A child can sit in the classroom, not interrupt, and until the test, no one even knows he exists. There is a culture of not-preparing homework; the teachers don’t check it.”

The computers in the schools don’t deliver the goods. “The computer labs are not welcoming, and they are not accessible. The computers only half work, they are not intuitive, and they are riddled with viruses. Windows operating systems are no longer suitable for education in our day and age – yes, Microsoft doesn’t like me on this topic, but I am adamant: this type of computer in a school is a punishment of sorts. If I had learned in such a classroom, I would never have gone on to study computer science.”

“When they get home, the computer is just Facebook and games. They don’t see it as a creative tool. The computer interface is not a tool for building something new.”

So how can the accomplishments of Israeli scientists and young high-tech workers be explained? Moran asks, and then answers: “We are a very creative nation, but if you look closely, you will see that not all Israelis are geniuses, but just a few thousand people who received the right education. And what about the rest? I don’t intend to invest my efforts in excessive support of projects for the gifted. There is enough of that. I want to improve them all.”

The process, he says, requires a move to communication using tablets. “A strong, advanced, new desktop computer needs to be the work tool of professionals. For everyone else, the tablet is an amazing tool. Very few bugs, few viruses, it doesn’t shut down when you update software, the device is comfortable and intuitive to use. You don’t need a computer-support person to install an app. Even I need a computer-support person for my desktop computer.”

A part of learning

Moran’s vision is for each child in the schools of the future to receive a tablet, with digital school books. Such things exist already today, but they don’t solve the first problems, having to do with the teacher’s image and relationship with students. These difficulties can be solved with Learni’s new idea – involving the teacher in writing another layer of information on top of the books – comments, a link to a movie, a photo found online. “When he reaches the classroom, he can use the program to control everyone’s tablets and show them a video clip. So the class becomes richer.”

Afraid the teachers will add content to the schoolbooks that isn’t sufficiently professional? This sort of attitude is precisely the problem. Education is, by nature, expanding upon what exists in the books, but today, teachers are not sure how much to add, or how, or what degree of creativity exactly they are expected to demonstrate.

The idea behind Learni is to make the teacher’s creativity an integral part of the learning process, and thus to rekindle the fire in the teachers’ eyes, and to reignite the children’s belief in their teachers.

Using the Learni system, the teacher can write a question in a book, and receive automatic feedback when students answer it. The teacher can address a specific student who misunderstood the question, check the student’s previous answers in order to pinpoint when he or she lost track of the material, or whether there is a troubling pattern in his or her answers. The teacher can also have a dialogue with the student.

This connection goes two ways, or actually three way: teacher with student, student with teacher, and both with computer. “The student can also create a passage, read a translation, dig deeper on a particular word by searching online – the book comes to life, ” says Moran.

The next step is to move from digital books that teachers comment on to include also schoolbooks based on aggregated material written by the teachers themselves. “Last year, 300 teachers using our tool wrote some 3, 000 worksheets. A group of teachers in Bat Yam wrote a digital history book themselves – how much money does this save the system? And it also does good for the history teacher who wrote some of the book himself – he has full command of the material.”

Learni was founded three years ago by Moran, Check Point co-founder Marius Nacht, David (Dedi) Zucker, and others. The company has raised $3 million from Moran himself and other private investors, and is managed by Arnaud Rodrigue.

Moran says that the company is succeeding. “We launched a pilot a year ago, and all the schools that worked with us expanded their participation (except one, for budgetary reasons).

Also abroad, we see that many countries are starting to learn with tablets. In Los Angeles, there was recently a tender for 5 million units. The initiative generally doesn’t come from the Ministry of Education, but rather from mayors who care, or specific schools that want to show that they are the best.” Learni is also making a breakthrough abroad, and recently won an academic tender at London Business School.