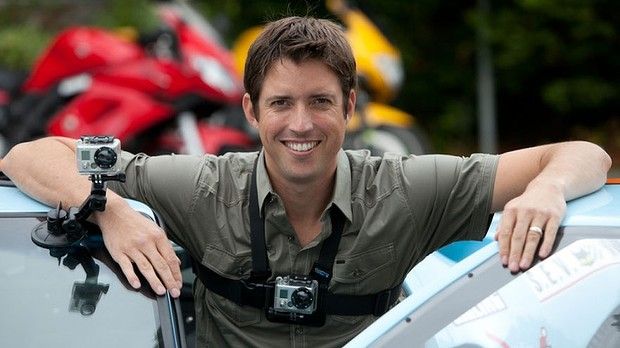 Nick Woodman is the 36-year-old founder and CEO of GoPro, a maker of highly ruggedized, wearable, cameras made by his private company Woodman Laboratories that can capture footage for athletes as they whiz down a mountain, surf 6-foot waves or dive deep below the ocean in company of sharks.

Founded in 2002, GoPro has become a firm favorite among extreme sports practitioners, and both professional and amateur adventure-seekers. The company most recently introduced its latest Hero3+ line of cameras, which are up to 20 percent smaller and lighter than previous models and feature 30 percent better battery life.

In December 2012 Taiwanese tech manufacturer Foxconn bought almost 9% of the company putting up US$200 million for the privilege. Foxconn, a.k.a. Honhai Precision Industry Co Ltd, is the company makes all those millions of iPhones for Apple by the way.

Forbes indicated at the time Woodman had kept majority control then. If Woodman kept only just over half the company with that deal, that still valued his own stake at the end of 2012 at over US$1 billion.

Now fast forward to early 2014 and we learn that GoPro last week on Friday filed documents with the SEC for an initial public offering. As its revenues are under US$1 billion GoPro can do, and indeed has done, make thee details of the filing confidential until its prospectus is approved by the regulator. This keeps important details out of the eyes of potential competitors a little longer, yet by publicizing the fact of the filing itself GoPro are starting to build the marketing “buzz” that needs to precede an IPO to ensure success.

After graduating in visual arts from the University of California in San Diego, Woodman founded his first startup back in the year 2000, during the dotcom bubble, with nearly US$4 million of OPM – which stands for other people’s money. The business tanked just a year later.

Not in the least discouraged, and an avid surf boarder, he was looking for ways to take pictures while surfing with a waterproof camera that wouldn’t fall off. Unable to buy one that met his needs, he decided to build one, raising US$235, 000 initially, of his parents money, to get started.

Having come a very long way since, from 14 employees to over 150 at the beginning of 2014, now there is an IPO on the agenda GoPro certainly needed some more grown ups on the company’s management team. Accordingly we learn former Qualcomm Aexecutive Jack Lazar has been hired to be its new Chief Financial Officer; it will be his job to steer the IPO through the system on a sound footing.

In 2012 GoPros revenues were up around US$500 million, according to the company’s founder in an earlier conversation with Forbes. Once the Prospectus details are eventually approved, and its details finally made public, we will learn just how fast the company’s revenues and bottom line may have been growing since.

The GoPro camera attaches to your helmet or to your chest; to the front of your surfboard or your snow board; to the wing of an airplane or to a sky divers helmet; to a scuba divers forehead, or even to the chassis of a formula one racing car – basically anywhere you want to put one. Whether above ground, on the ground or below the surface. Or even into space.

Even though they are exceptionally rugged, the GoPro camera takes high quality digital still images and, increasingly, high quality video as well, with the latest models good for up to 4K video.

With the Sochi winter Olympics in full flow right now GoPro cameras are there too in force, and once the rights holders are done there will be lots of new youTubes from their owners to be posted for sure.

While Nick Woodman likes to say he did it all on his own it is not entirely true. His father is Dean Woodman, who ran Merrill Lynch’s west coast corporate banking operation for 16 years. He later founded his own investment bank Robertson Colman Stephens & Woodman. Then too, his step father is Irwin Federman who is a General Partner of major VC firm US Venture Partners.

To get going Nick Woodman took loans of US$235, 000 from his mother and his father, which he later paid back out of revenues. Then once he needed the venture community obviously it was not too hard to get connected.

However it has been the concept of his camera itself that has won all the arguments for him so far. Simply put he beat out all the established players in the business to bring the GoPro into being – and the most up to date top model sells for only US$399. In addition it has acquired mythic life-style brand status from many of its devoted grass-roots users very early on in its life.

Woodman, who is on the edge of 40, is married to Jill Scully; they have two children together and live in Woodside California. Woodman is sometimes known as the “mad billionaire” due to his unconventional behavior and eccentricities.

As of March 2013, he is worth an estimated US$1.3 billion, though if the pending IPO should be a big success this number could well go up significantly.

In this article:GoPro, US, IPO, Finance