Carnegie Mellon University announced today that it is receiving a donation of US$67 million from hedge fund manager and CMU alumnus David Tepper. 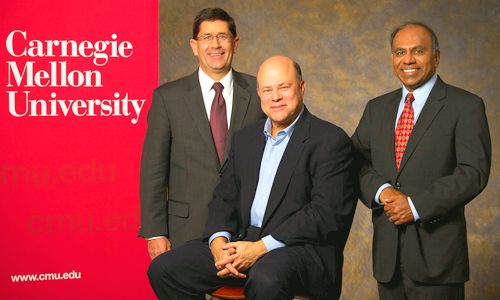 Carnegie Mellon is a private research university in Pittsburgh, founded by industrialist Carnegie Mellon more than a hundred years ago. Today’s Carnegie Mellon has seven colleges and independent schools: the Carnegie Institute of Technology (engineering), the College of Fine Arts, the Dietrich College of Humanities and Social Sciences, the Mellon College of Science, the Tepper School of Business, the H.John Heinz III college and the School of Computer Science.

David A. Tepper earlier gave US$55 million to CMU’s Business School in 2004, renamed then the Tepper School of Business, and the new gift will pave the way for a completely new quadrangle which will house the Business School. The total project is expected to cost US$201 million.

The project includes building a 300, 000-square-foot new home for the School of Business. It will also provide a new welcome center and improved facilities, including larger classrooms, a fitness center and a cafe.

The new gift comes from Mr. Tepper’s charitable foundation. The earlier gift in 2004 was donated personally, by Mr. Tepper and his wife, Marlene.
It is also an auspicious moment for the new President of CMU Subra Surech, as it is the occasion for his official inauguration to the role to which he was appointed in July. According to Subra Suresh “Our vision for the new David A. Tepper Quadrangle builds on CMU’s strengths, creating new interdisciplinary interactions for learning and research and connecting innovation to the business community”.

The new quadrangle will now become home to the CMU School of Business, from which David Tepper himself graduated in 1982. Responding to Subra Suresh David Tepper said,  ”I’m excited by President Suresh’s and the university’s vision to make CMU the foremost entrepreneurial academic institution in the nation, ”

“CMU has a long history of providing the world with innovative thinkers, and the establishment of a true hub for entrepreneurship will help create the next generation of global leaders. I’m particularly pleased to announce this gift on the day that CMU inaugurates President Suresh.”

President Suresh continued ”David Tepper is a visionary, both as a businessman and a philanthropist, and we are grateful for his generous support of the university and the business school that bears his name, ” … “Carnegie Mellon’s culture is historically holistic, integrating research and learning among individual schools and academic disciplines.”

In the last ten years Tepper has given a total of over US$125 million to CMU, mostly to the business school and serves on its Board of Trustees.

The delighted Dean of the Business School, Robert M. Dammon, whose school will be the immediate beneficiary of the new project for his part said,  ”There are natural intersections between the business school and the research and teaching taking place at each of the seven schools and colleges at Carnegie Mellon, ”

“The new home for the business school will enable us to enhance our undergraduate and graduate programs in business and economics, expand the possibilities for innovative research and interdisciplinary degrees, and allow us to offer a flexible technological framework that anticipates the needs of next-generation learning. The combined involvement of faculty, students, alumni and staff from across the CMU campus is a rare, powerful resource.”

Mr. Tepper, who is 56, grew up in Stanton Heights in Pittsburgh, graduated from the now-closed Peabody High School in 1975 and earned an economics degree at the University of Pittsburgh in 1978 and then a master’s degree in industrial administration from CMU in 1982, what is today called an MBA.

David Tepper founded and is president of Appaloosa Management, a hedge fund firm that invests primarily in distressed companies. He set up Appaloosa in 1993 after spending the previous eight years working at Goldman Sachs, mostly dealing with bankruptcies and special situations there. This then became the knowledge and experience base for him went he went out on his own with Appaloosa. According to Forbes David Tepper has a net worth of US$7.9 billion as at September 2013, and is ranked #166 on their world billionaires list.

Forbes also indicates that for the first seven months of 2013, Apaloosa’s flagship fund posted returns of about 23.4%. Tepper had also navigated his main hedge fund to returns of about 30% in 2012. With US$20 billion under management Appaloosa Management just celebrated its 20th anniversary and has generated average annualized returns of 28% since it started twenty years ago.

For 2012, Institutional Investor’s Alpha ranked him No. 1 in the entire hedge fund industry for earning a $2.2 billion payday in that year alone.

David Tepper is married to Marlene and they have three children.

Finally David Tepper also said at the inauguration today, “Carnegie Mellon tied everything together for me and gave me a great foundation, ” said Mr. Tepper, founder of Appaloosa Management and a graduate of the university’s business school. “My earlier gifts were a payback to the university, and this is a continuation of that.”

That is a pretty good philosophy to have.

In this article:Pittsburgh, Finance, Appaloosa Management