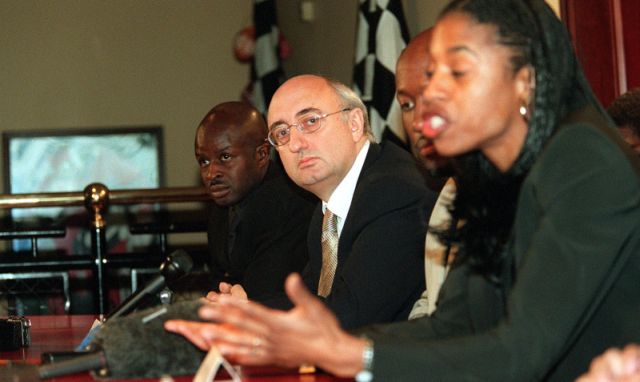 Jonathan Barnett, one of the UK’s best-known sports  agents, specializing in the world of soccer, has one of the game’s most exciting players on his books at the moment- Gareth Bale of Tottenham Hotspur. With the world’s top clubs with the deepest pockets, amongst them Real Madrid and Manchester United hot on the heels of the young and talented Welshman, wanting  to sign him as soon as possible for as little as possible, Barnett will have to bring into play  ample amounts of his own style of juggling to make the best dea forhis hottest player.

It is now close season in the world of soccer, and the stadiums are empty. But don’t let the silence fool you, this is the time when the players take a rest and their agents are working flat-out. None more so than Jonathan Barnett, who apart from handling a considerable stable of England’s top players, has the responsibility of handling the affairs of Gareth Bale, one of the very few Welsh players to make it to the top levels in British football.

Now it appears that Barnett is set to lead Bale to new stratospheres with one of Europe’s larger and more successful clubs, with the leading question being how much will the transfer fee be, and how large and lucrative a contract he can negotiate for his 23-year-old protégé.

As is always the case in these situations, the precedents are always set by how much other clubs are prepared to pay to pick up a top quality player with such a golden future as Bale appears to have. Real Madrid has always shown that they are never afraid to reach for the checkbook when it comes to picking up a player, especially one who is such a crowd pleaser as Bale. Real already hold the world record for paying out for a player, investing $120 million to bring Christiano Ronaldo to the club from Manchester United in 2009, breaking the world record that they set themselves just a few weeks earlier when they signed Kaka of Brazil from AC Milan for $85 million just a few weeks earlier.

At one time, Real Madrid seemed keen to break at least the Kaka signing record to bring in Bale, but that now seems less than likely as, according to soccer pundits, the club  have too large a squad and will need to unload a few players before they can raise the kind of cash reserves they will need to sign the player. Barnett is hoping a factor  that  may tempt Real to reach for their  checkbook before anyone else is that their arch rivals Barcelona recently paid out mega dollars to bring another emerging talent, the Brazilian Neymar to the club, to play alongside the world’s  current leading player, Lionel Messi.

On the other hand, Manchester United are reputed to have most of the cash intact that they received for Christiano Ronaldo, and have a few players that they could offer in a part exchange that might interest Tottenham more than those regarded as surplus at Madrid, who will come with much higher salary expectations than the players from United, traditionally more frugal when it comes to offering terms for their secondary squad  players.

And apart from all of these considerations, Barnett will also have to take into account that Tottenham will do everything in their power to persuade Bale to stay with the club, including up his salary considerably.

However what may entice Bale to make the move to either Madrid or Manchester is the promise of European Champions League football, something that Tottenham’s chairman Daniel Levy cannot offer, at least for this season.

As the transfer window is not due to close until the end of August, there is still a lot of time for a dark horse to come in and make an offer.

What’s for sure is that whatever agency fees that Jonathon Barnett earns the increasingly topsy turvey of soccer transfers, not just from Bale, if a deal can be done, but other players that he handles,  will be hard earned.

In this article:Barcelona, Manchester United, Finance