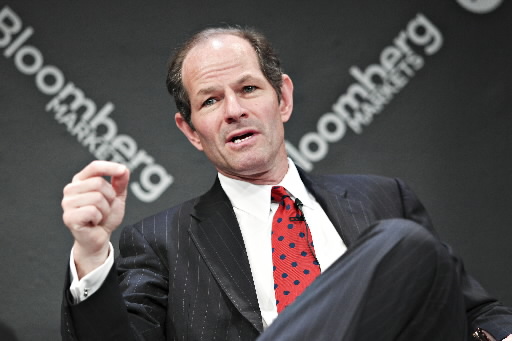 When Eliot Spitzer was Governor of New York he was forced to resign in 2008 over a prostitution scandal that had little to do with his office, but at the time made his political opponents very happy indeed.

After keeping a politically very low profile the last several years as a TV commentator, so still therefore in the public eye, he has now come out to say he may run for election to the usually fairly low-level job as Comptroller of the City of New York.

The existing Comptroller John Liu has announced he is quitting to become one of the candidates to run for the job of Mayor now that the incumbent Michael Bloomberg is leaving the job after 12 distinguished years in office.

On the surface this can be a puzzler…what after all does the job entail? The City Comptroller’s primary responsibilities are to advise the Mayor on all financial aspects of the running of the City of New York. As such, giving it a corporate analogy he acts as Chief Financial Officer to the city. Since the city has a huge budget of around US$70 billion each year, for the Comptroller this is therefore administratively a very detailed, complex and in terms of substance important job taken on its own terms. He has major budget-setting responsibilities and subsequent audit responsibilities to make sure the city’s money is both properly appropriated, spent and accounted for. He also supervises the enormous US$135 billion pension plan for the city’s public employees.

As such the Comptroller directs an operation of 700 people; accountants, attorneys, computer analysts, economists, engineers, budget, financial and investment analysts, claim specialists and researchers. Hardly a glamorous political plum you might think though, and normally you would be right. However Spitzer is making it very clear that if elected he would handle the job very differently to his predecessors.

In the same way, when he was Attorney General of New York State in the early 2, 000s, before he became Governor of the State, he single-handedly turned it into a very high profile political position instead of its usual mundane legal administrative function. As a result, by becoming a leader in the prosecution of major financial fraud he ended up personally wildly popular. At the time he was nick-named “The Sheriff of Wall Street” long before Madoff and all the other excesses that almost brought down the financial system later in the decade.

This then spear-headed his successful bid for the Governorship of New York to which he was elected in 2006 until he was forced out two years later.

Spitzer’s newly announced candidacy for the Comptrollership has been greeted with typical irreverence and wit in the New York tabloids with not-so-subtle references to the scandal that drove him from office. “Here we go again, ” declared the New York Post on its front page. “Lust for power, ” said the New York Daily News headline.

Still, voters elsewhere in the United States have signaled a willingness to give second chances. Earlier this year, former South Carolina Governor Mark Sanford, who had resigned after trying to cover up a visit to a mistress in Argentina, was elected to Congress.

Spitzer, who became a television commentator after leaving public office, decided to run during the July 4th holiday weekend, he said. “This is the dream: to be able to assume office on behalf of the public once again, ” he said.

The deadline to file a petition to be on the September 10 primary ballot for the job to succeed Liu is Thursday of this week, by which time Spitzer must collect 3, 750 signatures in support.