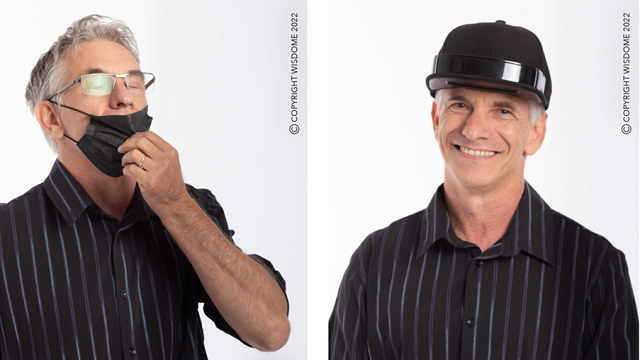 Call it Covid or the Coronavirus, what is undeniable is that three years after the first reports of an outbreak in Asia, people the world over are still fearful of infection, even with multiple vaccinations available. Well, now researchers at the Technion – Israel Institute of Technology say they have developed a “revolutionary” invisible facemask to protect wearers against the transmission of COVID, MERS, influenza, and other respiratory viruses.

The Technion recently licensed the technology to Wisdome Wearables Ltd. This new startup is currently in the process of commercializing the product and seeking partners to realize this disruptive technology for the benefit of those at high-risk of suffering from respiratory viruses.

Whether you acknowledged its necessity and believed that it helped stop the spread of the Covid virus, or believed that it was useless, everyone agreed that wearing masks all the time was something uncomfortable. People were also bothered by not being able to see one another’s faces, their smiles, and their frowns alike.

So, this is why having a clear mask to use in the future is so important. But not just that – the Technion has also found a way to make a mask that also protect wearers from disease transmission. So, there will no longer be any argument as to the efficacy of masks in stopping the spread on a virus like Covid.

As the Technion researchers explained, although conventional facemasks help protect against disease transmission, recent scientific literature shows that they also present adverse psychological and physiological effects. They reduce facial identification and emotion recognition, adversely affect oral communication, and can cause headaches and skin problems. Wearing masks throughout the workday also results in a lack of focus, as well as reduced attention and patience in a wide range of professions. As a result of these difficulties, many people wear masks incorrectly – on or below their mouths – which greatly reduces protection. Even in Japan, where facemasks are common, a large study found that just 20% of people wear masks correctly.

Now, a Technion team led by Professors Moshe Shoham and David Greenblatt has come up with a radically new solution to the conventional mask dilemma by creating an invisible “air-screen” in front of the wearer’s face. The air-screen originates from within a lightweight filter-covered unit mounted on the visor of a cap. Several major advantages became clear: the air-screen protects the eyes, nose, and mouth without negative effects on facial identity, emotion recognition, or oral communication. The air screen is also reusable, so it does not pollute the environment.

Recently published research, based on experiments conducted in Prof. Greenblatt’s laboratory, demonstrated the air screens efficacy by effectively blocking aerosols produced during oral communication, as well as large droplets produced by coughing and sneezing. It also removes quiescent aerosol-laden air from in front of the face by a process known as “entrainment.” This joint effect of blocking and entrainment can be seen in the video, where laser illumination is used to render the airflow visible. David Keisar and Anan Garzozi, students in the Nancy and Stephen Grand Technion Energy Program, were instrumental in conducting and analyzing the experimental data, and in developing a theoretical physics-based mathematical model of the air-screen.

Several one-on-one interviews and pilot studies with more than 50 subjects from various sectors (e.g., older adults and their caretakers in nursing homes, university professors and their students, close-proximity workers including tutors, physiotherapists and psychologists, retail workers in stores and offices, and high-tech management teams and board members who participate in long meetings indoors), clearly showed the advantage of the invisible air screen over the commonly used face masks. These groups represent potential early adopters, who will benefit most from this new technology in Israel and globally.