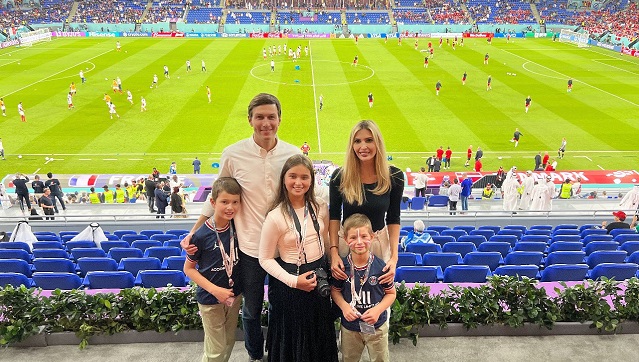 They say that rank has its privileges. Well, even former ranks – and ones that were not even really earned in the first place – offer people a lot of privileges, at least where Ivanka Trump and Jared Kushner are concerned. The power couple was seen hobnobbing with royalty in Qatar while enjoying luxury accommodations at the World Cup soccer championships currently being held in the Arab Gulf state.

Qatar is certainly no friend of Israel and it was no surprise that the autocratic Muslim state declined to join its neighbors the United Arab Emirates (UAE) and Bahrain when they made peace with Israel in the Abraham Accords of 2020. And neither did Saudi Arabia. But that did not stop Jared Kushner from cutting deals for himself throughout the Arab world before his father-in-law left office. Both Kushner and Ivanka Trump seem to have done little as White House staffers under daddy Donald Trump other than advance their own financial interests.

Ivanka Trump and Jared Kushner were spotted the other day chatting with Qatari Prime Minister Khalid bin Khalifa bin Abdulaziz Al Thani while they watched Brazil defeat Serbia in a match. They were joined by their three kids Arabella, 11, Joseph, 9, and Theodore, 6. This trip came just after the family toured Egypt. Ivanka Trump has never been shy about showing off her family and shared photos of herself and the kids at the Pyramids on social media.

Now Ivanka Trump has also blasted pics of her family in Qatar on social media. With the captions like, “3 days, 4 matches, a ton of laughs and countless family memories made at the World Cup!,” and “Go Team USA!” she posted pictures like the one above with Jared Kushner and kids.

So, this must be what Ivanka Trump meant when she said that she wanted to devote herself to her family and so would not be taking part in daddy Donald Trump’s 2024 presidential campaign. And, of course, she and Jared Kushner need the whole world to see them – the privileged children of the rich – getting to travel the world and go to the World Cup while making business contacts and meeting with local political leaders to make more money.