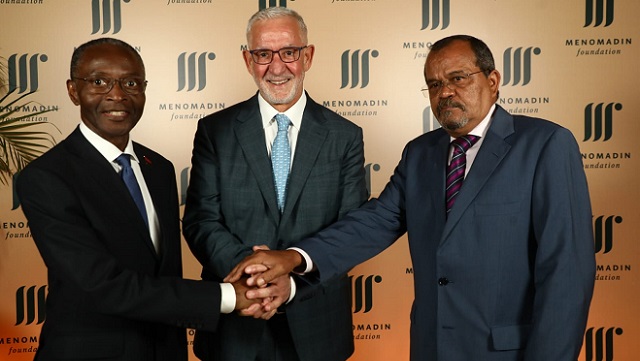 Government officials from Africa joined Israeli leaders at a gala event held in Tel Aviv hosted by Israeli businessman Haim Taib to celebrate Africa and Israel’s growing relationship in business and cultural ties. This was the inaugural event for Taib’s Menomadin Foundation.

The event celebrated the great strength of the relationship between Israel and Africa, especially in the many partnerships in innovation.

Held at the Tel Aviv Museum of Art, the event was attended by guests of honor including former Vice-President of Angola Mr. Bornito de Sousa Baltazar Diogo, who arrived in Israel to explore partnerships and visit Israeli universities. Also attending was Israel’s Minister of Labor, Social Affairs and Social Services, Meir Cohen, Minister of Interior Ayelet Shaked, and Angola’s Minister of Labor, Public Administration and Social Security, Teresa Rodrigues Dias, who came to Israel to learn about the country’s innovation in education and technology.

Haim Taib is the Founder and President of the Mitrelli Group and the Menomadin Foundation. The Foundation specializes in creating and implementing innovative practices, designated to produce social impact. Other participants included Ambassadors to Israel of Ethiopia, Rwanda, Morocco, Angola, and Equatorial Guinea along with further distinguished guests from Angola and across Africa, together with business leaders and public sector partners from Israel and Europe.

Haim Taib told the gathered dignitaries, “Humanity’s greatest challenge is to ensure that people, all people, never lose the ability to dream of a better life for themselves. Through our projects and investments over the last decades we have been helping communities and individuals realize their dream for a better future, first through Mitrelli, and now, through the Menomadin Foundation, which is helping to amplify this benefit and impact.”

Former Vice President of Angola Bornito de Sousa Baltazar Diogo, said, “We are here today to talk about more than Angola, we are here to talk about all of Africa. Indeed, we are here to talk about more than impacting one or two communities, we are talking about changing lives across a whole continent, tackling poverty and climate change – making history and building the future. I invite the businesspeople, academics and scientists, artists and personalities in the culture sector, sports players, youth and students in particular, to get to know Angola and the opportunities it holds for business, cooperation, and tourism, following the example of the entrepreneurs who already develop their projects there.”

During the event, the Menomadin Foundation presented its first impact report, and showcased some of the highlights of the work conducted by the Foundation both in Israel and in Angola.

Key examples included the collaboration with “Save a Child’s Heart”, which brings children from around the region and Africa for life saving surgeries in Israel; the “Fundação Arte e Cultura”, which aims to empower individuals and communities through art, culture, and heritage; and the “A’alam Druze Civic Leadership” initiative, which aims to increase Druze representation in both local and national centers-of-influence while embracing Druze heritage, values, and history.