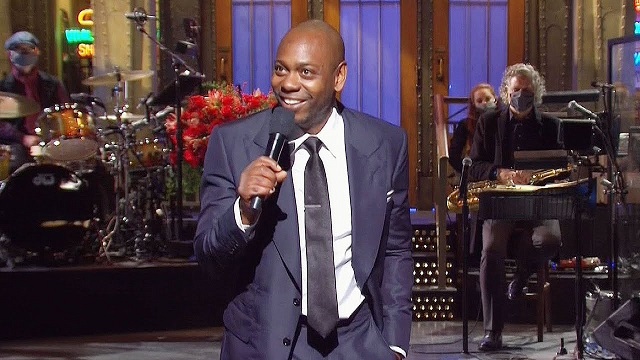 Controversial comedian Dave Chappelle hosted Saturday Night Live (SNL) over the weekend and proved why some of the show’s writers who boycotted it last week due to his appearance were right to do so and even the ADL has condemned him. Chappelle was criticized for making ant-trans comments in his recent Netflix standup show, but what went unnoticed at the time was an anti-Semitic rant and Dave Chappelle made a number of offensive comments about Jews on SNL.

The rants came during Dave Chappelle’s opening monologue, something that every host does in every show in SNL’s 37 years on the air.

Acting like he was denouncing Kanye West’s anti-Semitic rants, Dave Chappelle opened his SNL monologue by saying, “I denounce anti-Semitism in all its forms and stand with my friends in the Jewish community.”

But then Dave Chappelle added, “And that, Kanye, is how you buy yourself some time.”

But wait, there was more!

“I’ve probably been doing this for 35 years now and early in my career I learned there are two words in the English language you should never say together in sequence and those words are ‘The’ and ‘Jews,’” added Dave Chappelle. “I never heard someone do good after they said that.”

It would have been one thing had Dave Chppelle ignored the recent controversy over Kanye West’s antisemitism, but instead he portrayed West as a victim. Chappelle also said that it was unfair for companies like Adidas to cancel West’s business deals, costing him a fortune, making it a free speech issue, and joked that this is why he does not do endorsements himself.

While many praised Dave Chappelle’s appearance, some were quick to point out his indefensible remarks, including ADL CEO Jonathan Greenblatt.

“We shouldn’t expect Dave Chappelle to serve as society’s moral compass, but disturbing to see NBC SNL not just normalize but popularize antisemitism,” said Jonathan Greenblatt. “Why are Jewish sensitivities denied or diminished at almost every turn? Why does our trauma trigger applause?”

Dave Chappelle also basically said that Jews control Hollywood and while pretending to be deferential toward Jews he added that since Chappelle knows a lot of Jews, “I’m not freaked out by your culture.”