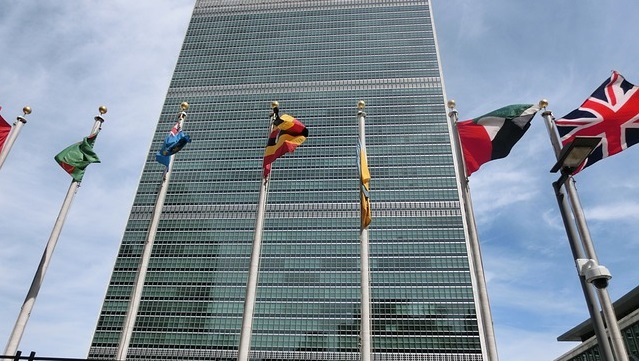 A United Nations committee on Friday approved an anti-Israel resolution that calls for referring the issues of the Israeli-Palestinian conflict and Israeli “annexation” to the International Court of Justice (ICJ) in The Hague. The resolution was prompted because the Palestinians did not like seeing an increase in the number of Jews visiting the Temple Mt. over the recent Jewish holiday period and they called this somehow an attempt by Israel to change the status quo on religious worship in Jerusalem.

In complaining that Israel is plotting to deny Muslims their right to worship freely in Jerusalem the very same resolution ignored Jewish rights of worship on the temple Mount.

The resolution itself used inflammatory and defamatory language against Israel saying the ICJ “render urgently an advisory opinion” on Israel’s “prolonged occupation, settlement and annexation of Palestinian territory.” In other words, the UN committee resolved that Israel is already guilty of whatever it says and is only asking the ICJ to ratify its political position.

Outgoing Prime Minister of Israel Yair Lapid did not hold back in his condemnation of the resolution, saying it would only harm the peace process and not help it. “This is another unilateral Palestinian move which undermines the basic principles for resolving the conflict and may harm any possibility for a future process,” he said. “The Palestinians want to replace negotiations with unilateral steps. They are again using the United Nations to attack Israel.”

Lapid went on to say that this move by the UN will not do anything to change the current situation and warned that it might even “result in an escalation.” He also called it a reward for terrorist organizations and the general campaign against Israel’s very existence.

The American government’s delegation to the United Nations issued a statement condemning the resolution, saying that it will only serve to complicate the furtherance of a diplomatic solution to the conflict that will lead to ta two state solution. “The United States strongly opposes both the request for an advisory opinion and the resolution in which it has been included. We call on other Member States to join us in voting against this package of counterproductive resolutions.”

“President Biden has been clear that Israelis and Palestinians equally deserve to live safely and securely and deserve equal measures of freedom, dignity, justice, and prosperity,” read the statement. “The United States is firmly committed to supporting the path to a two-state solution through constructive measures.”

But the statement also criticized the UN for its continued attacks on Israel saying, “The failure in these resolutions to acknowledge the shared history of the Haram al-Sharif/Temple Mount, a site sacred to both Jews and Muslims, is perhaps the clearest demonstration that they are intended only to denigrate Israel, not to help achieve peace.”

Israel and the US were not alone in condemning the resolution The Czech Republic also rejected it saying, “We will never accept denial of Jewish ties to Temple Mount. Also, we prefer dialogue of both sides to unilateral involvement of the International Court of Justice in the Middle East Peace Process.”