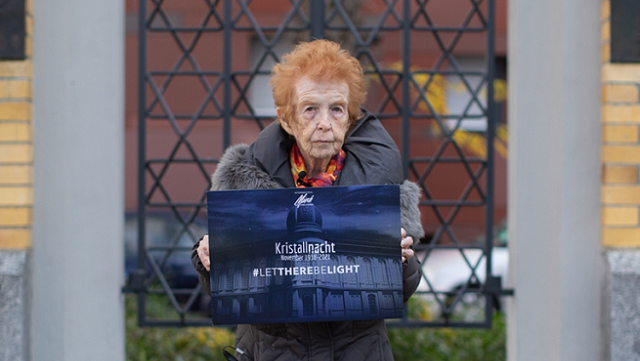 In yet another sign of how Israel – and the entire Jewish world – is making progress in its relationships with Arab nations since the signing of the Abraham Accords in 2020, Dubai, the capitol of the United Arab Emirates (UAE) will host a special event to commemorate the 84th anniversary of Kristallnacht in cooperation with International March of the Living. A three-way event is to be held in Jerusalem, Vienna, & Dubai; on November 9th, 2022, at the Crossroads of Civilizations Museum in Dubai, Holocaust Survivor Eve Kugler (91) will tell the story of her survival and experience during the Holocaust to an audience in the UAE.

In the UAE landmarks, institutions, and houses of worship will be lit up to remember Kristallnacht. The event will mark the opening of the new March of the Living Chapter in the Gulf.

Kristallnacht is widely considered the opening event of the Holocaust. On November 9-10, 1938, hundreds of synagogues were burned across Germany and thousands of Jewish-owned businesses were damaged or destroyed by Nazi vandals during the infamous Kristallnacht pogroms. Approximately 100 Jews were murdered and around 30,000 more were rounded up and sent to concentration camps, marking an ominous turning point in history, and a key juncture in the evolution of the mass genocide of the Jews carried by Nazi Germany during WWII.

Holding such a Holocaust commemoration in an Arab nation is significant because Holocaust denial has been a frequent tool of nations like Iran as part of their efforts to delegitimize Israel.

Eve Kugler was only 7 years old when the Germans broke into her home on that fateful night. She will tell her story for the first time to an audience in the UAE, and will also visit a school where she will meet with Jewish and Muslim children.

H.E. Ahmed Obaid AlMansoori, Founder of the Crossroads of Civilization Museum said, “As a student of history, I acknowledge the Holocaust as the worst crimes against the Jewish people. As a Muslim, I cannot standby and allow the memory of the victims, and the voices of the survivors, to fade into history. I am privileged to host this historic commemoration event at the Crossroads of Civilizations Museum, where we established the first Holocaust Memorial Gallery in the Arab and Islamic world, with the goal of learning from history’s lessons for a better future. I am honored to host a Holocaust survivor, Eve Kugler, who’s an essential voice of hope, who will be educating us all about the horrors that she endured as a child during Kristallnacht.”

In addition to this special event marking 84 years since “Kristallnacht / the November Pogrom” the International March of the Living is launching its third interfaith campaign of unity to remember Kristallnacht under the title, “Let There Be Light”. The campaign is aiming to commemorate the past but also to raise awareness about the current atmosphere of intolerance, prejudice and racism that exists in the world today, by participating in a public educational effort that will be joined by people of all faiths and backgrounds.

Eitan Neishlos, President of the Neishlos Foundation & March of the Living ambassador to the Gulf States, said, “As a grandson of a survivor, who was saved by a Christian family later murdered by the Nazis, I have a responsibility to hold the torch of memory, and feel a deep duty to bring the lessons and the memory of the Holocaust to all communities and all faiths. All humanity must hear the stories and learn the lessons of the Holocaust. I am grateful to the Emirati leadership for their courage and clear voice promoting tolerance. I am hopeful, thanks to the work of March of the Living, and with the inspiration of Eve’s story in particular, we will greatly contribute to promoting understanding and mutual respect for all peoples.”

In Vienna a “March of Light” from the Heldenplatz to the Judenplatz will take place concluding with a commemoration ceremony. In Jerusalem a moving ceremony will take place in which Holocaust Survivors who witnessed Kristallnacht will be recognized, and messages of hope from around the world will be projected onto the ancient walls of the Old City.