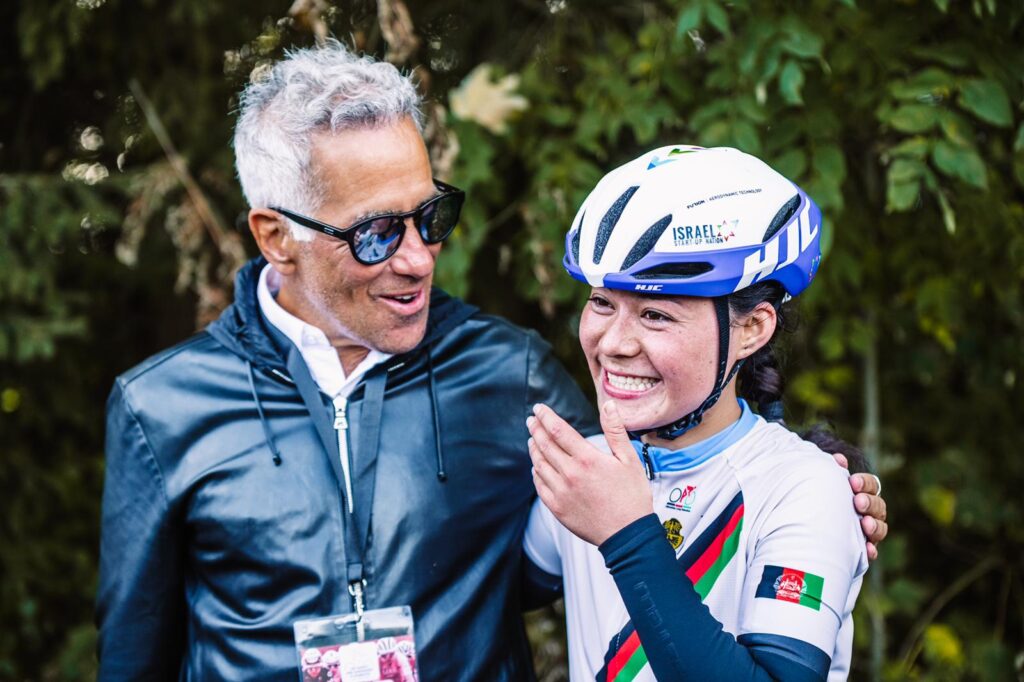 On Sunday, sisters Fariba (19) and Yulduz (22) Hashimi finished first and second at the Afghan national cycling championship. The championship event was actually held in exile in Switzerland this year because, unfortunately, such events were outlawed by the Taliban when it returned to power in Afghanistan.

The sisters had managed to escape the country just days before the Taliban entered Kabul. Fariba Hashimihas since been building a new life in Italy.

Following her victory, the Women’s WorldTour team Israel – Premier Tech Roland, offered Fariba Hashimia a contract for the upcoming season, which she happily accepted. The spot on the roster means Fariba has a chance to race the Tour de France Femmes, and with the announcement of a U23 Continental team in the works, Yulduz will join her next year.

IPT owner Sylvan Adams, who played a key role in the rescue operations that helped hundreds of Afghans to escape the Taliban in August 2021, commented saying, “We are making history here as these two brave women become the first from their country to reach this level of the sport. It is part of our commitment to helping young cyclists from all over the world – from developing nations to war zones. From our Racing for Change initiative in Rwanda to Afghanistan, we are more than a cycling team.”

“It was also a sound professional decision based on merit, explained Ruben Contreras, the owner and manager of Israel – Premier Tech Roland. “Both sisters raced for the Italian team Valcar and showed promise,” he added. “We expect them to progress a lot with us.”

Fariba Hashimisaid, “I can’t lie – it’s so exciting but it’s pressure, too. Honestly, I didn’t think I would get this opportunity to ride for a WorldTour team and chance to race in the Tour de France. I will take the challenge head-on and race for all the women in Afghanistan. My country today is dangerous for many of the women living there. Women are not free to live and thrive as they wish, but if they see me riding in the TDF with the Afghan colors they will see that everything is possible.”

Also competing in the race were 49 brave women who were among 400 Afghan women, rescued from the Taliban thanks to Canadian businessman and philanthropist Sylvan Adams, the owner of UCI World Tour team – Israel – Premier Tech, who worked in cooperation with IsraAID, an international non-governmental humanitarian aid organization based in Israel, and the Asian Cycling Confederation, to airlift the women to safety.

Some struggled to finish the race as they had been rescued just months ago and did not have the time or resources to train. But they did not give up, even when the 57-kilometer course felt torturous.

One of those women, Zarifa Hussaini (20) was out of breath and exhausted, but smiled broadly when she reached the finish, saying “It was very hard to finish after more than a year of struggles to escape … but I just could not let myself give up and stop. It was my freedom race, and I couldn’t afford to quit.”

Since making Aliyah in 2016, Sylvan Adams has brought to Israel the first three stages of the Giro d’Italia Grand Tour bicycle race in 2018, Madonna to perform at the Eurovision Song Contest in Tel Aviv in 2019, co-founded the Israel WorldTour cycling team and brought huge football matches and Judo Grand Slams to Israel. During the last year, Adams has opened the Sylvan Adams Children’s Hospital in Holon, and the world’s biggest and most advanced emergency room at Ichilov in Tel Aviv.

In July, a group of 70 Afghan refugees, many of them female athletes and cyclists, who escaped after the Taliban regained control of the country, finally arrived in Rome today after a long journey that lasted many months. There they were greeted by Israel – Premier Tech owner Sylvan Adams, who played a significant role in their rescue.

Adams led the rescue operations from Afghanistan, which have been ongoing since September 2021, together with an international group comprised of diplomats, UCI President David Lappartient, and the Israeli NGO IsraAid. The group has worked together to help extract and resettle all of the Afghans rescued.

Sylvan Adams and his wife Margaret have already made numerous philanthropic contributions to Israel through their Margaret and Sylvan Adams Family Foundation. These include the Sylvan Adams Sports Institute at Tel Aviv University and other medical centers.