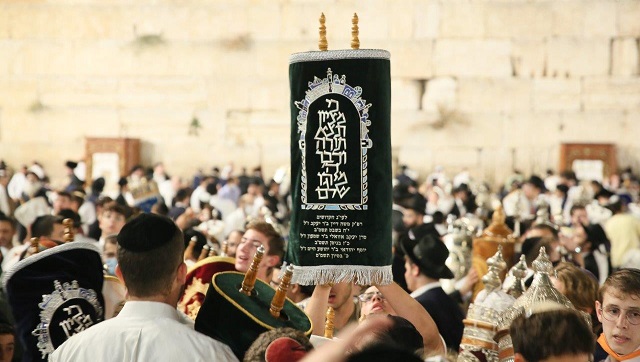 People Dance with the Tora (The Kotel.Org)

People packed the Kotel Plaza in Jerusalem on the last night of the Sukkot Holiday. They gathered there for the final day of Sukkot known as Hoshanna Rabah. And an estimated 50,000 worshippers were said to have filled the Kotel area over the Shemini Atzeret holiday and the special celebrations that came after its end.

While still part of Sukkot, Hoshanna Rabah is a special day in and of itself. According to the Kabbalistic tradition, while Yom Kippur – the Day of Atonement – is the day on which people are judged, it is not until this day that the judgement is finally sealed.

To this day, Jews around the world perform a special ritual that was once performed at the Temple in Jerusalem. They take one of the four species on which blessing are made on Sukkot, the Aravot – branches of the willow tree – and slam them against the ground causing their leaves to fall off.

Hoshana means “bring us salvation.” The special prayer of Hoshanot is said every day on Sukkot. But on Hoshanna Rabah day during prayers all of the Tora scrolls are removed from the ark and the congregants make seven rotations around the synagogue.

Monday was a different holiday called Shemini Atzeret. The day is also known as Simchat Tora – the celebration of the Tora. It is the day on which the annual cycle of Tora readings is concluded and then restarted. The celebrations include singing and dancing with the Tora scrolls called Hakafot. This is done both on the night of the holiday and during the daytime.

The holiday is known as the most festive of the year as it marks an end to a three week holiday period. It also marks the end of an almost two month period in which Jews the world over concern themselves with repentance before Rosh Hashanah and the observance of major holidays.

There is a further tradition of holding additional Hakafot the night after the holiday ends. This was observed all over Israel Monday night, including at a packed Kotel Plaza.

These Hakafot were broadcast live around the world.