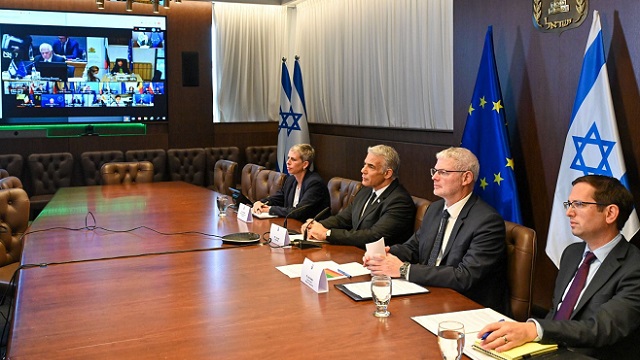 Prime Minister of Israel Yair Lapid on Monday led the convening of the EU-Israel Association Council. This was the first meeting of the EU-Israel Association Council in over a decade. EU High Representative for Foreign Affairs and Security Policy Josep Borrell, as well as the foreign ministers of additional EU countries, participated alongside the Prime Minister.

Since the opening of the Delegation in 1981, the relationship between the European Union and Israel has expanded significantly, making it one of the most wide-ranging and deepest relationships that the EU enjoys with any third country in the world.

The EU-Israel Association Council offered an opportunity for wide-ranging discussions on EU-Israel bilateral relations, against the backdrop of global challenges such as Russia’s military aggression against Ukraine, the global energy crisis and rising food insecurity. The discussion focused on issues such as trade, climate change, energy, science and technology, culture, the respect for human rights and democratic principles, freedom of religion as well as the fight against antisemitism.

The EU-Israel Association Council also discussed global and regional issues of shared interest and concern, in particular the Middle East Peace Process, where the EU hopes to build on the momentum generated at the UN General Assembly.

“This historic meeting represents a diplomatic breakthrough that will strengthen Israel’s standing, and recognizes Israel’s importance and value on both a regional and global level,” said Prime Minister Lapid. “Additionally, this meeting will contribute to the expansion of economic-diplomatic ties between Israel and the EU, and the advancing of bilateral cooperation in trade, climate, energy, water technology, digitalization, cyber, and health. These steps will greatly benefit the citizens of Israel when it comes to lowering the cost of living, strengthening the economy, agriculture, and tourism.”

Josep Borrell said, “It is important for us to relaunch this high-level form of political dialogue between the European Union and Israel. It is the best way of frankly engaging on many issues, which are of mutual concern and, in particular, on the [Middle East] Peace Process and the stability in the wider Middle East region. On the international stage, we need to work together to tackle global challenges, and recently, on the brutal Russian aggression against Ukraine. Nowadays, cooperation between democracies is more crucial than ever.”