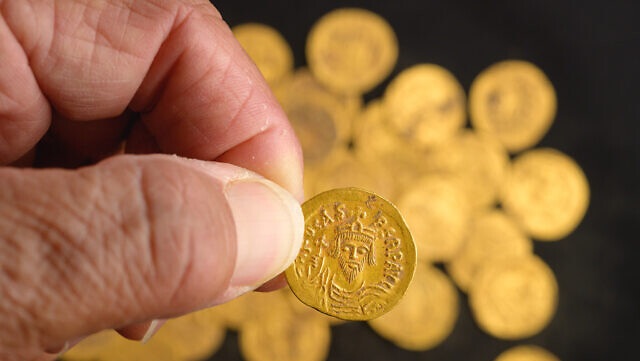 A treasure of 44 pure gold coins was recently discovered in the area of Banias – an ancient city near a tributary of the Jordan River in the Golan. The coins provide archeologists evidence of what they described as a dramatic moment in the history of Israel – the Muslim conquest of the Byzantine Empire and the establishment of the Umayyad Caliphate in the Middle East.

The coins are comprised entirely of gold solidus coins (a highly pure gold coin issued by Constantine during the Late Roman Empire era, with some identified as of Emperor Phocas (602–610 CE), and many minted by Emperor Heraclius (610–641 CE). The latest coins of Heraclius date the coin hoard to the time of the Muslim Conquest of Byzantine Palestine in 635 CE.

By the time these types of coins were first minted – the 7th century – the Roman Empire had long since fallen and only the Eastern Empire based in Constantinople, which became known as Byzantium, remained.

In the excavation conducted by the Israel Antiquities Authority, which took place in the northwestern residential quarter of the ancient city of Banias, the remains of buildings, water channels and pipes, a pottery kiln, bronze coins, and fragments of many potteries, glass, and metal artifacts, were found. The finds date to the end of the Byzantine period (early seventh century CE), and to the early Middle Ages (11th–13th centuries).

The excavations, interestingly, came about because of preparatory work that needed to be performed prior to connecting the adjacent Druze holy site Maqam Nabi Khadr to Israel’s national electricity grid.

According to Dr. Yoav Lerer, Director of the excavation on behalf of the Israel Antiquities Authority, “The coin hoard, weighing about 170 g, was concealed within the base of an ashlar stone wall at the time of the Muslim conquest. The discovery reflects a specific moment in time when we can imagine the owner concealing his fortune in the threat of war, hoping to return one day to retrieve his property. In retrospect, we know that he was less fortunate.” Lerer adds, “The discovery of the coin hoard may also shed light on the economy of the city of Banias during the last 40 years of Byzantine rule.”

Banias, now a National Park, is an archaeological site that was settled around a large spring in several periods, first established by Canaanites, who dedicated a shrine to the god Baal. In the Hellenistic period, Banias served as a cultic site to the god Pan (from whence the original Greek name of the site). The settlement reached its peak in the Early Roman period, when Herod the Great, and his son Philip II, entirely rebuilt the city and named it Caesarea Philippi, in honor of the Roman emperor Augustus.

According to Christian tradition, Banias gained fame as the place where the Apostle Peter proclaimed Jesus to be the Christ, and Jesus gave Peter the keys of the kingdom of heaven. In the Byzantine period, a church was built next to the spring. In the Crusader period, in 1129, the Crusaders undertook the fortification of the city to make it a military base from which to attack and conquer Damascus, but this was short-lived as the Moslems conquered the city in 1132 CE.