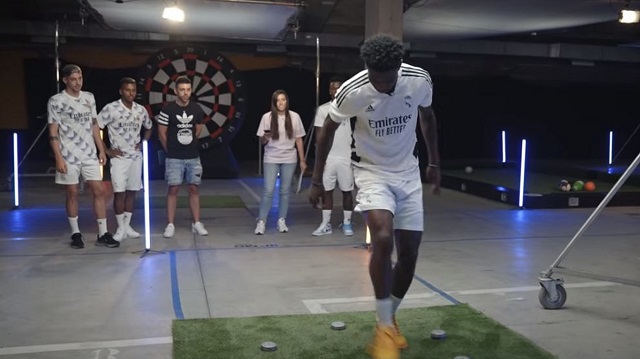 BlazePod is an Israeli athletic company that offers the Flash Reflex training system. Real Madrid stars Vinicius Junior, Rodrygo, Aurelien Tchouameni, and Federico Valverde recently competed on the company’s platform. They competed against each other in a series of mini-challenges to mark the reveal of the FIFA 2023 ratings.

Among the various challenges the soccer stars faced was the BlazePod challenge, in which the top players competed on the physical-cognitive training platform developed by the company.

As part of the challenge, which tested the speed of reflexes of the stars of the Champions League winner and the Spanish champion, they were asked to touch as many lighted pods as possible for 30 seconds. Vinicius won the challenge with 52 points, Aurelien Tchouamaeni came in second place with 48 points, followed by Federico Valverde with 44 points and Rodrigo with 38 points.

Among the additional challenges that the players faced: kicking balls to the target, speed and reflex challenge, snooker-soccer challenge, technique training, strength exercises, and more.

Founded in 2015 by Yaniv Shneiderman, BlazePod is an Israeli technology company that has developed an innovative platform for physical-cognitive training (Body & Mind). The platform is based on custom BLE technology and combines light, technology, and movement measured through a mobile app. The company began marketing the product in Israel and around the world in 2018.

The BlazePod kit comes with four or six pods that include touch sensors in eight colors and is activated through an app where the trainer or exerciser selects the type of interactive training and defines the type of action you want as soon as the selected color appears on the pod. This is how the trainers work on reaction speed, movement, physical strength, improving reflexes and performance, spatial orientation, and making quick decisions.

BlazePod is used by top athletes from a variety of sports all over the world. Former football star David Beckham and his wife Victoria posted a video on Instagram in which they compete in a joint BlazePod workout, the video has received over 10 million views! Other top athletes use the platform including Steph Curry, Novak Djokovic, Danny Avdija, Formula 1 drivers, Pierre Gasly and Alexander Albon, former world boxing champion Anthony Joshua, football stars Adrien Rabiot of Juventus and Roberto Firmino of Liverpool, Maccabi Tel Aviv basketball players alongside physiotherapists, clinics, hospitals, the US Army, The IDF and children in kindergartens and more. The company has 45 employees in Israel and the US.