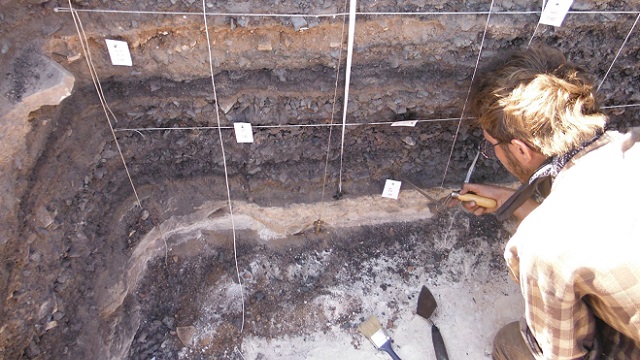 Scientists from Tel Aviv University have found evidence that human activity already began to have a destructive impact on the environment as far back as 3,000 years ago. In their research, they collected samples of charcoal used as fuel for metallurgical furnaces in the Timna Valley, located in Israel’s southern desert region, during the 11th-9th centuries BCE and examined them under a microscope.

They found that the charcoal fuels used changed over time. The earlier samples contained mainly local white broom and acacia thorn trees, excellent fuel available nearby, but the quality of the firewood had deteriorated over time, with later samples consisting of low-quality wood fuel and timber imported from afar.

So, the researchers concluded that the immense copper industry had overexploited woody plants used to prepare charcoal, and without which the industry itself was eventually forced to shut down. To this day, the local environment has not recovered from the severe damage.

The ancient copper industry at Timna was not managed in a sustainable manner, determined the researchers. They said that the overexploitation of local vegetation eventually led to the disappearance of both the plants and the industry. Copper production was not renewed in this region until about a thousand years later.

This seems like the same story that has been told over and over again over the centuries: mining always has adverse effects on the environment, whether it is for precious metals or fossil fuels. And this also applies to the building of roads and the stripping away of hills and vegetation for the expansion of cities around the world.

The study was conducted by PhD student Mark Cavanagh, Prof. Erez Ben-Yosef, and Dr. Dafna Langgut, head of the Laboratory of Archaeobotany and Ancient Environments, all from TAU’s Jacob M. Alkow Department of Archaeology and Ancient Near Eastern Cultures, and Dr. Langgut is also affiliated with the Steinhardt Museum of Natural History. The study was published in the prestigious journal Scientific Reports from the Nature portfolio.

Prof. Erez Ben-Yosef, director of the archaeological excavations in the Timna Valley explained, “Many findings in the Timna Valley indicate that a vast copper industry flourished here for a period of about 250 years, between the 11th and 9th centuries BCE, with thousands of mining sites, and about 10 processing sites that used furnaces to extricate copper from the ore. This impressive operation is known to the public as ‘King Solomon’s Mines’, and today we know that copper production actually peaked here at about the time of Kings David and Solomon. “

The Bible never mentions the mines directly, but it does say that David conquered the area of Timna, known at the time as Edom, placing garrisons throughout the land, so that the Edomites became his subjects; and that his son Solomon used huge quantities of copper for building the Temple in Jerusalem. It is inferred that David was interested in this remote desert region because of its copper – an important and valuable metal at the time, used for making bronze among other purposes.

The researchers explain that Timna’s copper industry was highly advanced for its time, and that the metalsmiths who processed the copper were skilled and well-respected individuals. The copper was extracted from the ore via smelting in earthenware furnaces at a temperature of 1,200 degrees Celsius. The entire process took about eight hours, after which the furnace was smashed, and the copper retrieved from its base. The wood charcoal required to attain the high temperature was manufactured beforehand at special sites, by slow combustion of trees and bushes cut down for this purpose.

The charcoal samples, well-preserved thanks to the dry desert climate, were taken from mounds of industrial waste at two large production sites in the Timna Valley and brought to the archaeobotany laboratory at TAU. Dr. Dafna Langgut: “At the lab we examine plant remains discovered at archeological excavations. In the present study we examined more than 1,000 charcoal samples under an electronic microscope. The anatomic structure of the original wood is preserved in the charcoal, and under the microscope the species can be identified. The samples were dated according to the layer of the waste mound in which they had been found, and some were also sent out for carbon-14 dating.”

The researchers claim that the gradual change in the contents of the charcoal resulted from overexploitation that had destroyed the natural resources – in this case high-quality firewood, the acacia and white broom. Prof. Ben-Yosef: “Based on the amount of industrial waste found at the processing sites we can calculate the quantity of woody plants required for producing copper. For example, the production site called the ‘Slaves’ Hill’, which was only one of several sites operating simultaneously, burned as many as 400 acacias and 1,800 brooms every year. As these resources dwindled, the industry looked for other solutions, as evidenced by the changing composition of the charcoal. However, transporting woody plants from afar did not prove cost-effective for the long run, and eventually, during the 9th century BCE, all production sites were shut down. The copper industry in the Timna Valley was renewed only 1,000 later, by the Nabateans.”

Dr. Langgut concludes: “Our study indicates that 3,000 years ago humans caused severe environmental damage in the Timna Valley, which affects the area to this day. The damage was caused through overexploitation, especially of the acacia and white broom, which, as key species in the ecosystem of the Southern Arava, had supported many other species, stored water, and stabilized the soil. Their disappearance generated a domino effect of environmental damage, irreparably harming the entire area. Three thousand years later, the local environment still hasn’t recovered from the crisis. Some species, like the white broom, once prevalent in the Timna Valley, are now very rare, and others have disappeared forever.”