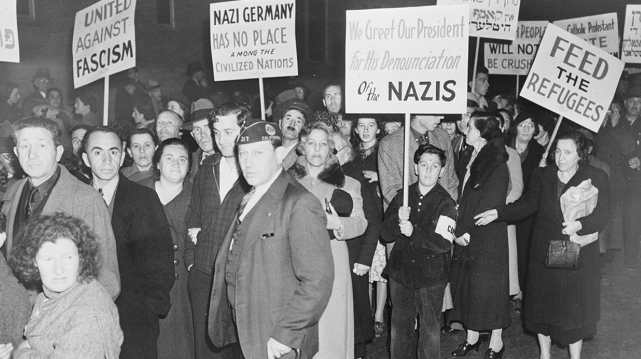 The US and the Holocaust by Ken Burns (from website)

Legendary documentarian Ken Burns has a new historical series about the Holocaust, specifically how the United States dealt with the crisis as it unfolded during World War II. “The U.S. and the Holocaust” premieres Sunday night on PBS. Ken Burns is the famed director behind such historic historical documentary series like “Baseball” and “The Civil War.”

Most everyone has already surely seen the two Oscar winning movies based on the true stories about both the survivors and the gentile heroes of the Holocaust – Roman Polanski’s “The Pianist” and Steven Spielberg’s “Schindler’s List.” There have also been extensive documentaries about the subject such as “Genocide” and “Shoah.” But this is the first time that a director delves into the issue of how Americans responded to the Holocaust, the good and the bad.

The U.S. and the Holocaust is a three-part, six hour series that examines America’s response to one of the greatest humanitarian crises of the twentieth century. Americans consider themselves a “nation of immigrants,” but as the catastrophe of the Holocaust unfolded in Europe, the United States proved unwilling to open its doors to more than a fraction of the hundreds of thousands of desperate people seeking refuge.

PBS says that through riveting firsthand testimony of witnesses and survivors who as children endured persecution, violence and flight as their families tried to escape Hitler, this series delves deeply into the tragic human consequences of public indifference, bureaucratic red tape and restrictive quota laws in America. Did the nation fail to live up to its ideals? This is a history to be reckoned with.

According to Ken Burns, by examining the periods leading up to and during the Holocaust with fresh eyes, this film dispels competing myths that Americans either were ignorant of the unspeakable persecution that Jews faced in Europe, or that they looked on with callous indifference. It also takes a candid look at the roles that eugenics and racism, as well as xenophobia and antisemitism, played during this crisis and throughout American history. In the process, it grapples with questions that remain essential to our society today: Is America, truly, as it claims to be, a land of immigrants? Why did we fail to rescue a people at the time of their greatest need? How do the continued struggles over how we define our past shape our future as a country?

As of today, the critics are giving Ken Burns’ “The U.S. and the Holocaust” top reviews. For example, The Hollywood Reporter said, “Smartly constructed and packed with avenues for future research and investigation, the three-night series may be the most viscerally affecting film to carry Burns’ name. It isn’t surprising how much sadness it induces, nor the sheer amount of anger it generates. But it’s a tremendous relief that the filmmakers find sources of inspiration and heroic interludes to stave off soul-draining exhaustion.”