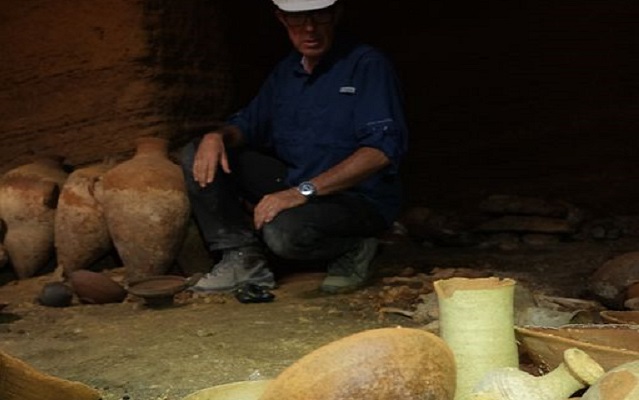 According to National Geographic, Ramses the Great was the Pharaoh during Egypt’s golden age. Also known as King Ramses II, he built more monuments and sired more children than any other Egyptian king. In his time, the Egyptian expanded their influence as far north as Syria by engaging in wars with the Hittites. Based in what is now eastern Turkey, the Hittites were the dominant power in the region, controlling Israel itself, at the time that the Israelites were slaves in Egypt.

Palmahim National Park is located on the coast just north of Ashdod. This was the area once dominated by the ancient Philistines, one of the Israelites’ greatest foes. So, it makes sense that the Egyptians would have crossed through and occupied this region during their many conflicts with the Hittites to the north. It was on the direct route from Egypt by way of the Sinai Peninsula’s north coast.

The discovery was made by workers from the Nature and Parks Authority when, while developing a new park, a tractor hit a rock, unexpectedly revealing the ceiling of the ancient burial cave. Dror Citron, inspector of the Antiquities Authority, was the first to recognize the space.

Archaeologists from the Antiquities Authority who inspected the cave described it as being frozen in time. In it, they found dozens of innocent (whole) pottery and bronze vessels, as they were originally placed there during a burial ceremony, about 3,300 years ago. These vessels, they explained, were burial offerings – they were buried with the dead in the belief that they would be used by them in the next world. The cave was carved in the shape of a square, and in the center of its ceiling was a pillar.

According to Dr. Eli Yanai, an expert on the Bronze Age at the Antiquities Authority, “This is a once-in-a-lifetime find! It’s not every day that you see an Indiana Jones set – a cave with dishes on the floor that haven’t been touched in 3,300 years. We are talking about the Late Bronze Age.”

“The fact that the cave was sealed,” he added, “and was not looted in later periods, allows us, with the scientific means available today, to extract a great deal of information from the objects and materials that survived on them, and which are not visible to the eye, including organic materials. The cave can provide us with a complete picture of burial customs in the Late Bronze Age.”

In the cave, mainly dozens of pottery vessels of various sizes and shapes were left. Among them, there are deep and shallow bowls, some of which are painted red, set (bowls with a high leg) cooking pots, jugs and clay candles that contained oil for light.

Next to the pottery, bronze arrowheads or spearheads were also found in the cave. According to their position, they were found in garbage from organic material that did not survive.