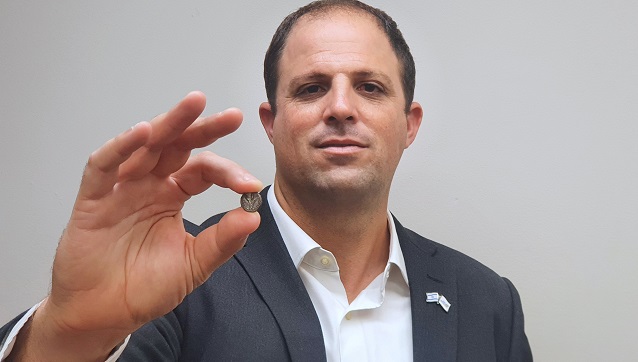 For the second time so far in September, a rare archeological find was returned to Israel where it belongs. On Monday the US returned to Israel an extremely rare Shekel coin, the fourth of its kind known in the world, which was stolen and smuggled out of Israel years ago. It is a quarter shekel coin made of silver, from the fourth year of the Jewish Great Revolt (66-73 CE).

The coin was returned after a transcontinental intelligence operation was conducted by the Israel Antiquities Authority (IAA) and the Antiquities Trafficking Unit of the Manhattan District Attorney’s office in New York.

Just last week, a First Temple-period document, dated to the late seventh or early sixth century BCE, which was written in ancient Hebrew script on papyrus, and which was probably found in the Judean Desert caves, was repatriated to Israel after a similar intelligence operation.

As for the Shekel coin, a ceremony was held at the office of the Manhattan District Attorney to mark its return,, in the presence of The director of the Israel Antiquities Authority Eli Eskozido, Consul General of Israel in New York Asaf Zamir, The Israeli Ambassador to the UN, Gilad Erdan, The Manhattan District Attorney, Mr. Alvin Bragg, and Homeland Security Deputy Special Agent in Charge, Mr. Mike Alfoso

The Roman Empire had granted local rulers limited permission to mint bronze coins, according to the client rulers’ respective degrees of importance and how close they were to the central government. Minting silver coins was a much more limited privilege granted to lesser number of more important and central cities.

“Because of this, the minting of silver coins by the leaders of the Great Revolt was in fact a declaration of independence by the Jews in the land of Israel, a statement against the mighty empire that stood before them. Many of the rebels’ silver coins were struck over imperial silver coins, covering the emperor’s face with Jewish motifs. This gave the coin a much greater symbolic value than the monetary value of the coin itself,” explained Ilan Hadad, archaeologist and inspector in charge of commerce at the Antiquities Theft Prevention Unit (ATPU) of the Israel Antiquities Authority.

Quarter Shekel coins from the fourth year of the revolt have not previously been found in situ in archaeological excavations. One similar coin was acquired in the 1930s by the British Museum, and about three more unofficially “circulate” in the antiquities black market and among various collectors.

In 2002, Palestinian antiquities looters unearthed a hoard of coins from the period of the Great Revolt, in the Elah Valley area. Among the coins in the hoard was a quarter shekel made of silver from 69 CE –– a year before the destruction of the Second Temple in Jerusalem.

The Israel Antiquities Authority spent the next two decades attempting to locate the coin, during which time it passed through illicit antiquities markets in Israel, Jordan and the United Kingdom. In London, false provenance papers were prepared to export the Quarter Shekel from the UK to the US, where it was offered for sale at the Heritage Auction’s World Coins & Ancient Coins Signature Auction scheduled for August 3, 2017, in Denver, Colorado.

Earlier this year, the case was passed to Colonel Matthew Bogdanos, Chief of the Manhattan District Attorney’s Office’s Antiquities Trafficking Unit (ATU). Working closely together, the Israeli Antiquities Authority and the ATPU developed sufficient evidence to execute a seizure warrant for the coin and received a court order repatriating the coin to Israel.

According to Bogdanos: “Today’s repatriation to Israel of this extraordinary coin represents a cherished piece of history finally going home. But it also represents an equally extraordinary partnership between New York’s Antiquities Trafficking Unit and the Israeli Antiquities Authority. It is a partnership that should be used as a model in recovering pillaged cultural heritage around the world.”