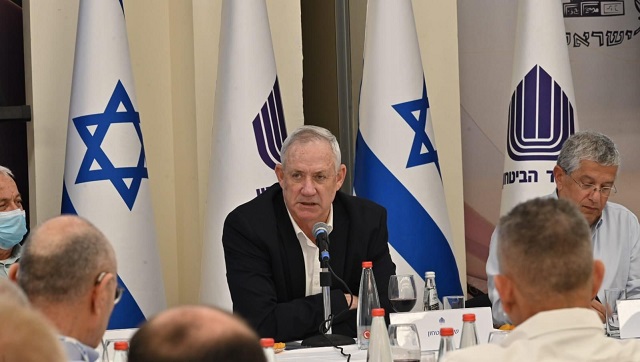 Benny Gantz, Israel’s Minister of Defense, made startling revelations to the world on Monday while speaking at the UN about just how advanced Iran’s nuclear program has gotten and how far its terrorist reach really is around the world. For example, Gantz revealed that Iran operates 10 different facilities in Syria for the production of missiles that are used by its proxies like the terrorist group Hezbollah.

All of Israel’s leaders, from Prime Minister Yair Lapid down to lower level cabinet ministers, have been making the case against any new deal with Iran that does not absolutely guarantee that Iran will never acquire nuclear weapons. And there has been a greater sense of urgency in recent weeks in Israel as to the matter as reports indicate that the international community is prepared to enter into a new nuclear deal with Iran that will not require serious inspection routines.

Some of this was revealed by Benny Gantz when he held a briefing for UN Security Council Ambassadors and representatives of the Abraham Accord signatories on the occasion of the two-year anniversary of the accords.

At that meeting, Benny Gantz declared unequivocally, “The number 1 cause for instability and terror in the Middle East is Iran. Iranian activities spread terror and could even spark an arms race.”

Benny Gantz explained that he believes that together the nations represented at the meeting could prevent it and that now is the time to act. He told those assembled that Iranian regional and global terror – whether it comes from Iran proper or via well-funded proxies – threatens their economies, energy resources, food security, trade, freedom of navigation and overall peace and stability and that this situation will only get worse if Iran acquires nuclear capabilities.

The Defense Minister also revealed that Israeli intelligence confirmed international reports that Iran is progressing its nuclear program. Over the past year, he explained, Iran has steadily increased its production of hundreds of centrifuges, which will enable enrichment to high levels. In the past year the number of advanced centrifuges more than doubled in Iran’s underground facilities of Natanz and Fordow.

“Iran is not only advancing in its capabilities, but also in its rate of production,” said Gantz.

Minister Gantz also addressed the “Open Files” issue. This is the matter of how the Iranians acquired intel on when international nuclear inspectors would make their inspections in order to hide what they were actually doing ahead of time.

“We cannot turn a blind eye to the open files,” he said, “We cannot give Iran a free pass and we, the international community deserve answers. A thorough investigation of the three undeclared sites will enable us to demand high-level inspections. The IAEA must remain a professional and independent organization.”

Earlier in the day at the Jerusalem Post Conference, Gantz outlined the consequences the world would face if Iran were to acquire nuclear weapons. First, he said,

Iran already systematically bases itself in the region via proxies – providing them with personnel, advanced weapons and military know-how. Since the start of 2022, there has been a sharp increase in Iran’s violent activities, with attacks employing advanced weapons such as UAVs and surface-to-surface missiles, against civilian and economic targets in the region.

“The lifting of sanctions against Iran will release more than $100 billion to the regime,” Gantz pointed out, “and without a doubt this would double or even triple its terror budgets.”

As for Iran’s activities in Syria, he proved that Syria’s Centre D’Etudes et de Recherches Scientifiques (CERS) military industry has been coopted by the Iranians and that there are now 10 sites used by Iran to produce advanced missiles and weapons for its proxies.

“This- is the “CERS” infrastructure in Syria – a network of production sites spread across the country, intended to serve Syrian military needs,” said Gantz. “Under the vision of Qassem Soleimani, Iran transformed CERS into production facilities for mid and long-range, precise missiles and weapons, provided to Hezbollah and Iranian proxies. In other words, it became yet another Iranian front – a factory for advanced, strategic weapons.”

These sites, particularly the underground facility at Masyaf, host significant threats to the region and to the State of Israel, Gantz explained. Masyaf specifically, is used to produce advanced missiles. And in addition to CERS, the Iranians are currently working to build missile and weapon industries in Lebanon and Yemen.

“If this trend will not be stopped,” said Gantz, “within a decade, there will be advanced Iranian industries across the region, producing weapons and spreading terror. The picture only darkens if Iran will be allowed to gain a nuclear umbrella.”