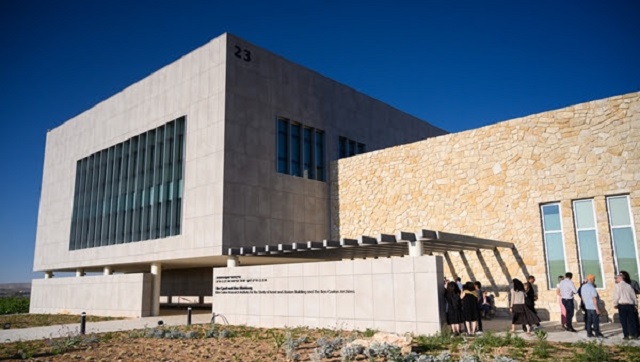 The archives of David Ben-Gurion, the first Prime Minister of Israel, are now available to the public for the first time at the new David Ben-Gurion Archives Building at the Ben-Gurion University of the Negev. The new state-of-the-art archive building houses the first prime minister’s original writings.

American presidents have long since had their own libraries. These are used to house all of their presidential papers and serve as both an archive for historians and a museum of the individual president’s legacy. They have become so important that presidents begin fundraising for their libraries before they even leave office.

When David Ben-Gurion, Israel’s first prime minister, passed away in 1973, an archive was established in a small underground space on the Sde Boker campus of Ben-Gurion University of the Negev, located in the middle of the Negev, south of Beer Sheva. The archive was primarily for research purposes, and all of Ben-Gurion’s papers were transferred to the IDF and State Archives.

The new “presidential” library, jointly run by Ben-Gurion University of the Negev and the Ben-Gurion Heritage Center, centralizes the materials written by and about David Ben-Gurion. It is the new home for Ben-Gurion’s handwritten diaries, his correspondence, articles about him, taped interviews, meeting protocols, and more. As part of the presidential library process, the IDF and State Archives have transferred the original documents to the new archives building in Sde Boker, which will become a focus for learning about the legendary David Ben-Gurion and through his life, learning about Zionism and the establishment of the State.

The Ben-Gurion Research Institute for the Study of Israel and Zionism has also moved into the new building, putting the highest concentration of Israel Studies scholars in the world in close proximity to the treasure trove of Ben-Gurion’s archive.

The new building includes a 280 square meter visitors center. The Ben-Gurion Heritage Center, which will run the visitor center, will offer guides to lead visitors in an encounter with the writings of Ben-Gurion, a central way to understand this larger-than-life persona. Visitors will get the thrill of discovery: uncovering hidden gems in drawers and closets. They will have the opportunity to experience and discover Ben-Gurion through his own words in his diaries, his correspondence (both official and personal), his speeches, news articles and protocols from the central organizations of which he was a member.

The archival materials represent an exceptionally lengthy period in Ben-Gurion’s life and his Zionist activities, from the beginning of the 20th century until his death in 1973. The earliest items in the archive were written at the beginning of the 20th century – for example, a letter that David Ben-Gurion’s father, Avigdor Green, sent to Theodor Herzl in 1901 recommending his son for the Zionist enterprise. The latest documents were written mere months before the death of the “Old Man” – for example, a letter sent to Ben-Gurion wishing him good health and the last letter Ben-Gurion signed in September 1973 wherein he effusively thanked a family who sent him two books chronicling the origins of the Jewish community of Korelitz.

Among the interesting documents the visitors will find: Ben-Gurion’s lists of what needs to be done if the state is declared after the UN vote on the partition plan on November 26, 1947; the diary page on the day he formally declared the state, and his fears for its future and its fighters; his correspondence at the apex of momentous times – during the War of Independence, the great aliya and reparations; his letters about yoga and artificial intelligence; his articles regarding Jewish Arab relations and the relationship between the Jewish world and the State of Israel and more.