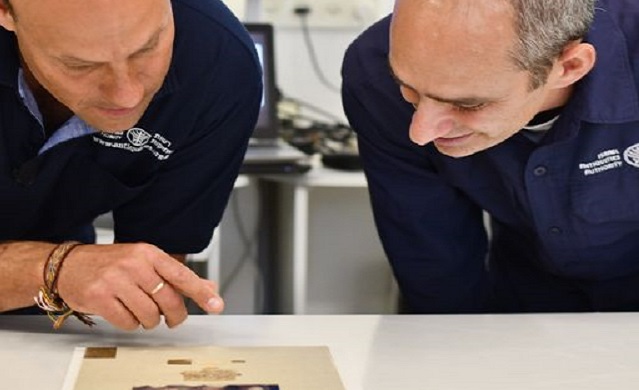 A First Temple-period papyrus document, dated to the late seventh or early sixth century BCE, which was written in ancient Hebrew script on papyrus, and which was probably found in the Judean Desert caves, has been repatriated to Israel.

The document, which was returned to Israel thanks to the cooperation of the Antiquities Theft Prevention Unit of the Israel Antiquities Authority, Professor Shmuel Ahituv, recipient of the Israel Prize for Biblical Studies, the Ministry of Culture and Sport, and the Ministry of Jerusalem and Heritage, will be presented for the first time to the public, at the First Judean Desert Conference that will be held next week at the Bible Lands Museum in Jerusalem.

The story behind this document will be presented for the first time at the First Judean Desert Conference that will take place at the Bible Lands Museum in Jerusalem next week, Thursday 15 September 2022. In the course of the conference which is open to the public without cost, the research projects carried out by the Israel Antiquities Authority in the Judean Desert Project in recent years and the important finds, will be presented.

The extremely rare document is composed of four torn lines that begin with the words “To Ishmael send….”, the text hinting that it is a fragment of a letter containing instructions to the recipient. Based on the writing, it is proposed to date the ‘Ishmael Papyrus’ to the seventh to sixth centuries BCE, joining only two other documents from this period in the Israel Antiquities Authority Dead Sea Scrolls collection. All three papyri come from the Judean Desert, where the dry climate enables the preservation of the papyri.

The story began when Dr. Ada Yardeni, scholar of Ancient Hebrew Script, passed away in June 2018, and Prof. Shmuel Ahituv was asked to complete the publication of a document she was working on. Ahituv was surprised to encounter the photograph of a rare and, until then unknown, document from the First Temple period, together with Yardeni’s preliminary decipherment. This led to a joint campaign by Ahituv and the Antiquities theft Prevention Unit of the Israel Antiquities Authority to locate the whereabouts of the original document.

The intelligence mission succeeded, and the person who owned the papyrus, a resident of Montana, USA, was located. He explained that the papyrus was given to his mother when she visited Jerusalem in 1965, by Joseph Sa‘ad, Curator of the Rockefeller Museum, and Halil Iskander Kandu, a well-known antiquities dealer from Bethlehem, who many years ago sold thousands of Dead Sea scroll fragments. Back home, his mother hung the framed scroll fragment on the wall.

In order to persuade the owner to transfer the fragile document to Israel, where it would be conserved in climate-controlled conditions, he was invited to visit the Israel Antiquities Authority Judean Desert Scroll Department’s Conservation Laboratory in Jerusalem. After the visit, the owner was convinced that here were the best conditions to conserve and research the rare document, and he generously gave it to the Israel Antiquities Authority.
The Dead Sea Scrolls Unit conserved the papyrus and documented it with the modern multispectral system used to monitor the state of the scrolls.

In order to confirm that the document was genuine, a small sample was radiometrically dated in the Weizmann Institute in Rehovot. The sample provided a date similar to that determined by the paleographic evaluation (based on the letter forms), thus consolidating the dating towards the end of the First Temple period.

The document was researched by Prof. Ahituv, and his findings will be presented next Thursday at the Israel Antiquities Authority’s First Judean Desert Conference at the Bible Lands Museum in Jerusalem.